(the justification to do this is here)

Now, let suppose that I want to heat the complex to detach the system B from the surface of system A.

How to have an estimate of the temperature needed to do that? The only idea that come to my mind is to use the rule of three with the association that 300K correspond to 25meV (via $k_BT$, with $k_B$ being the Boltzmann constant).

If I want to break a Li$_2$ molecule (i.e. remove atom A from atom B), one way to do it is by shining a laser on it such that the frequency ($\nu$) or energy ($h\nu$) corresponds to the difference between the energy at $v=0$ (if the molecule starts in the ground state) and the dissociation asymptote in this picture (generated based on [1,2]): 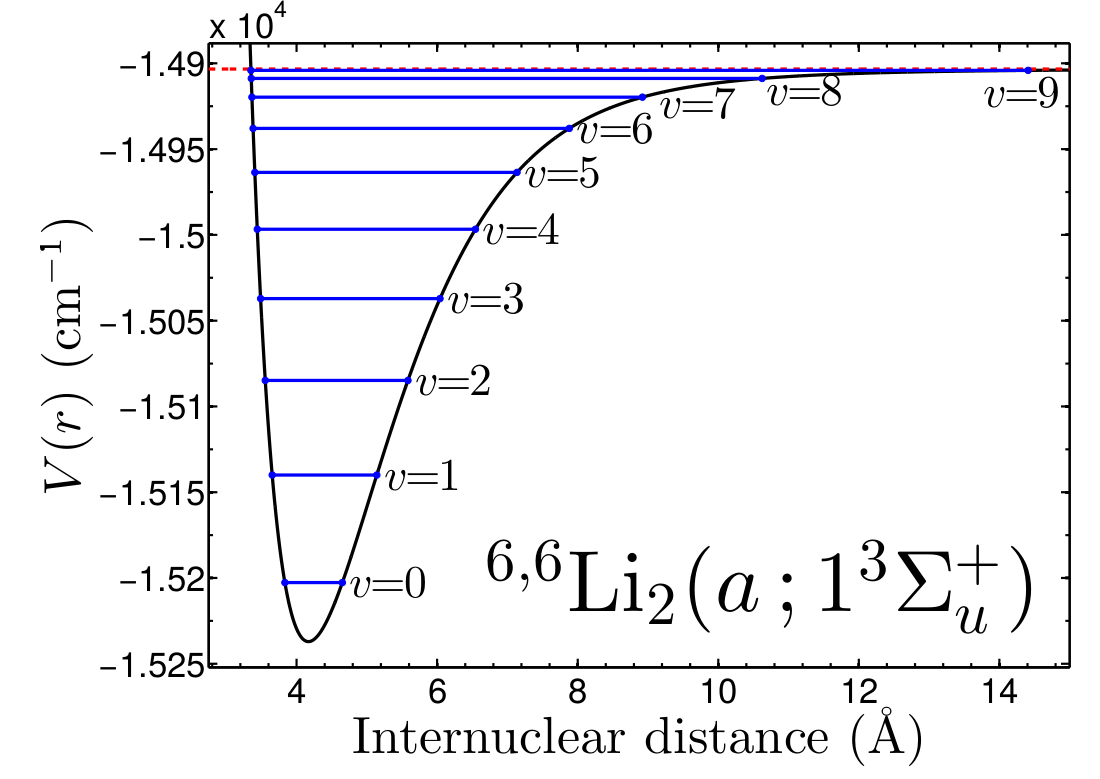 I think the question asks: What if we don't have a laser but we have some other way of turning up the temperature? How high would the temperature need to be, to break the molecule?.

I think that quantum mechanics tells us that even if we raise the system to a very high temperature, there is still no guarantee that the particles will separate, but we can estimate the temperature at which the dissociation happens with probability > 99%. One way to see the probability for a system with Hamiltonian $H$ and temperature $T$ to be in a particular state, is to use the formula:

Here, $\rho$ is the density matrix and the diagonal elements of it give the probabilities $p_i$ of finding the system in state $|i\rangle$. There is an infinite number of possible states for this system: 10 of them are shown in the above diagram ($v=$ 0 to 9), but there's also a "continuum" of states above the dissociation asymptote, and these are the ones we want, because these are the states that correspond to atom A being removed from atom B. If we sum/integrate the probabilities $p_i$ over all states that correspond to a dissociation, we can get the total probability $P$ of successfully breaking the bond at temperature $T$. Then, all we have to do is find the value of $T$ such that $P>99\%$.

Now if we are not dealing with Li$_2$ but instead with a complicated system AB, and we want to know the probability of detaching a sub-system (A) from the rest of the complex (B), the potential energy surface may look more complicated than the one in the above figure (maybe we don't just have an internuclear distance $r$ but we also have have angles), so the Hamiltonian will be more complicated, but Eq. \eqref{eq:boltzmann} can still be used to get the probabilities of the dissociated states 🙂.

A more approximate but sometimes easier approach than the one of Nike Dattani might be to calculate an artificial reaction coordinate of separating the two systems. This can be done manually or by employing some accelerated MD technique, e.g. metadynamics. The latter would even allow you to map the free energy along this path and thereby give you an estimate of the free energy barrier. You could then use your initial idea to directly translate this barrier to a temperature.

Not the answer you're looking for? Browse other questions tagged binding-energy temperature or ask your own question.

7
Quantum harmonic oscillator, zero-point energy, and the quantum number n
13
What are the scientific justifications of the binding energy equation?
10
Morse potential for phonons in solids instead of the harmonic potential approximation?
7
How to calculate E_TM in the formation energy formulas?

13
What are the scientific justifications of the binding energy equation?
18
Calculating binding energy between two systems
8
Docked pose and energy minimization
9
What is exfoliation energy per unit area?
11
Binding energy calculation for Zn atom on armchair graphene slab?
16
On the nature of zero-point energy (ZPE)
9
Is there an upper limit of temperature after which the quasi-harmonic approximation (QHA) fails?
10
Temperature effect on elastic constant using VASP
8
How can I find the binding energy for exciton (optical gap) with VASP?