Since MKL is not optimized for AMD hardware, should I use a math library specific to AMD, or would an open-source one be just as good?

The codes for quantum mechanical calculations make heavy use of linear algebra, and it seems most of them delegate this task to time-tested and highly optimized libraries, instead of trying to deploy their own. There is a plethora of options. For example, when we install Gamess-US in Ubuntu GNU/Linux, several options are listed, both proprietary and free / open source software: 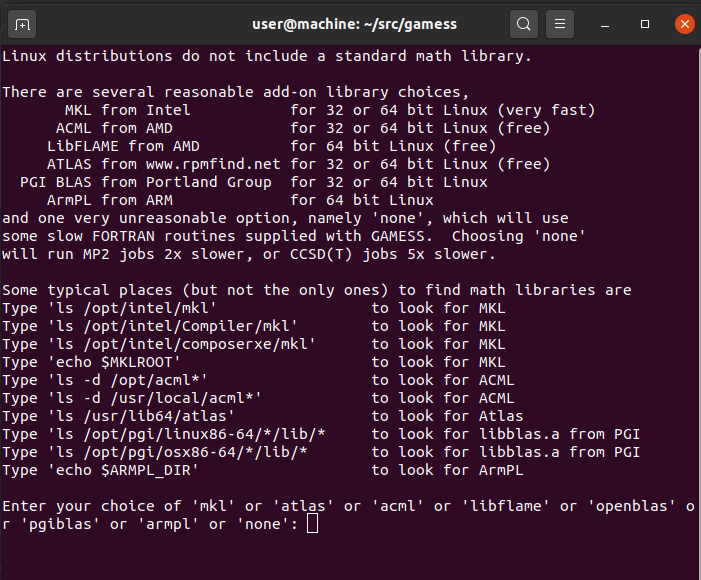 In the past I used ATLAS, and then MKL, as we are nudged towards it by the (very fast) qualifier given in the install screen. But then I was doing some research on it, and found this information on its wikipedia page:

Intel MKL and other programs generated by the Intel C++ Compiler improve performance with a technique called function multi-versioning: a function is compiled or written for many of the x86 instruction set extensions, and at run-time a "master function" uses the CPUID instruction to select a version most appropriate for the current CPU. However, as long as the master function detects a non-Intel CPU, it almost always chooses the most basic (and slowest) function to use, regardless of what instruction sets the CPU claims to support. This has netted the system a nickname of "cripple AMD" routine since 2009.

This got me a bit worried, as I'm trying to do a Gamess-US install in a machine with a Ryzen processor, and so I'm afraid I will get a crippled install if I use intel MKL. Given the number of remaining choices, without a clear idea of relative performance between them, I got some analysis paralysis. The obvious alternative would be one of AMD, but in absence of a substantial speed advantage, I could as well use a open source one, as I try to favor free software whenever I can.

If someone more experienced could give some advice on this problem, I would be grateful. How does the several linear algebra libraries compare to each other, on the workloads typical of materials modeling? Is there a big difference from one to other, or they are all optimized to such degree that doesn't matter much which one is used. Is there one with good overall performance over a variety of hardware, not biased against alternative hardware like the MKL seems to be?

OpenBLAS is a free, open-source BLAS library that has fast support for even recent processors. (It is based on the earlier, famous GotoBLAS library which became obsolete years ago.) OpenBLAS is also multi-platform: in addition to x86 and x86_64 it also supports other architectures like ARM and PowerPC. OpenBLAS also has runtime CPU detection; if you compile it in, the resulting library supports all processors and picks the best kernel at runtime.

IIRC OpenBLAS is as fast (sometimes has been even faster!) as MKL on some Intel processors; I don't think I've seen benchmarks on AMD hardware. But, the nice thing about OpenBLAS is that it's free, so it typically comes built-in your linux distribution. E.g. OpenBLAS has been available on Fedora and Red Hat Enterprise for a few years now (courtesy of yours truly), and to use it you just need to install the package

and then link to the flavor you want: on Fedora/Red Hat the available variants are

AMD's answer to Intel's MKL is called AMD Optimizing CPU Libraries (AOCL), which is coincidentally based on BLIS. In addition, it also includes FLAME (for LAPACK functionality), FFTW, and others.

Not the answer you're looking for? Browse other questions tagged software quantum-chemistry open-source high-performance-computing or ask your own question.

35
What is a good programming language for matter modeling?
28
Which Linux distribution is best for Matter Modeling?
24
Are there critical mistakes to avoid when creating a workstation (32-128 cores)?

10
What are the trade-offs setting DIRSCF to either .TRUE. or .FALSE. (the default) in GAMESS (US)?
14
What are some cloud services for computing?
8
Suggestions on laptops for matter modeling