I am currently trying to figure out how to compute band structures for my system, using the hybrid functional HSE06. I'm doing this on Quantum Espresso. As I understand, there are a handful of ways to do this:

2) The 'fake scf' procedure: This is similar to what is listed in Vaspwiki(here).

3) Generate scf data for a coarse 'q' mesh (of the Fock operator) and then interpolate these bands using softwares like BoltztraP2.

I am not familiar with the Wannier module on Quantum ESPRESSO, hence option (1) is sort of last resort for me, since Wannier takes some time to learn.

I would be grateful if anyone could help me figure out how to compute these bandstructures - either through one of the methods I mentioned, or any easy method as you see fit. I would like to add that I have access to considerable computational resources, so doing expensive calculations should not be much of an issue.

Also, I would like to say that I am open to methods that use other softwares - including VASP or CASTEP. I have both licenses (CASTEP through Materials Studio). But things can get a little tricky here because VASP for example, uses a different implementation of the Hubbard 'U' and it would corrupt my results if I port my QE input to VASP to calculate the band-structures.

I have seen all the methods you mentioned but have only done one myself; I'll explain here how to use Wannier90 in conjunction with Quantum Espresso to get band structures for hybrid functional calculations. It does take a bit of time to learn, but not very long! You can learn the basics and do some first calculations in an afternoon. There are subtleties of course that I won't get into, and if you have specific issues you should probably ask another question or send a message to the Wannier90 mailing list.

Doing the above I got this band structure. It obviously has some problems (some bands jumping up above the VBM) but the gap is larger than PBE and I did this with a very sparse grid, and no optimization of any options. 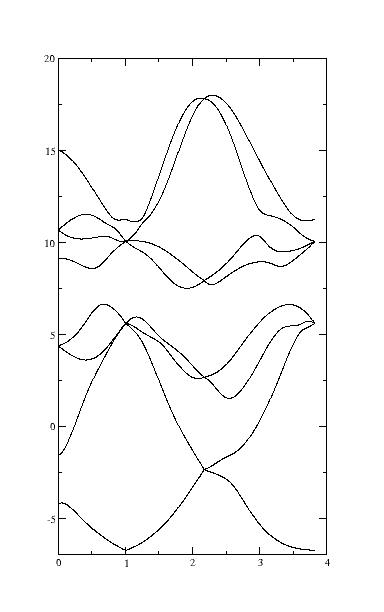 Apart from methods (1) and (2) mentioned in the question, the third method I found to be pretty viable under certain conditions. The procedure involves mathematical interpolation of the bands, so I have to caution the reader that this is not completely rigorous like Wannier interpolation, which retains the nature of the wave-functions generated from the SCF calculation. That being said, I'm pleasantly surprised by how well the BoltzTrap2 code handles interpolation, along with degeneracies.

The procedure is as follows:

i) Perform a self-consistent calculation with HSE turned on. The 'q' mesh (or Fock grid) that you choose for the calculation will affect the final band-structure. Typically, for big systems, one would not be able to choose a Fock grid that is commensurate with your K-grid. For instance, I worked on a 2D semiconductor with around 100 electrons in the system. My K-mesh was 12x9x1. In this case, I experimented with 'q' meshes of 1x1x1, 4x3x1 and 12x9x1. As one might imagine, the ideal choice would be 12x9x1 for the 'q' mesh since its commensurate with the K-grid. But this is very computationally heavy. My band-structure calculations, surprisingly, were somewhat converged at the 4x3x1 'q' mesh itself the band-gap difference with the commensurate mesh was around 0.05 eV. The bottom-line here is, the density of the 'q' mesh will affect the precision of the band-structure calculation since the basis is mathematical (for the Wannier method, this is not the case).

ii) Install BoltzTrap2. Rename the SCF input and output files as prefix.nscf.in and prefix.nscf.out . This needs to be done because the code takes in file names which are specified in the above format.

iii) Run the 'qe2boltz.py' file to convert the QE input to a format that's readable by BoltzTrap2:

Replace 'f' here with the value of the Fermi level printed in your SCF output.

where 'n' decides how fine your interpolation needs to be for the band-structure. Typically, values of 1000-2000 should be good enough.

For any logistical issues, the BoltzTrap code documentation and also this tutorial might be helpful.