I am working on modelling of a material that has partial/mixed site occupancies. For example consider the tetragonal (P4mm) compound $\ce{(Ba_{0.67}Sr_{0.33})TiO3}$. Following is the atomic arrangement (visualised in VESTA) when looked along the Z axis. 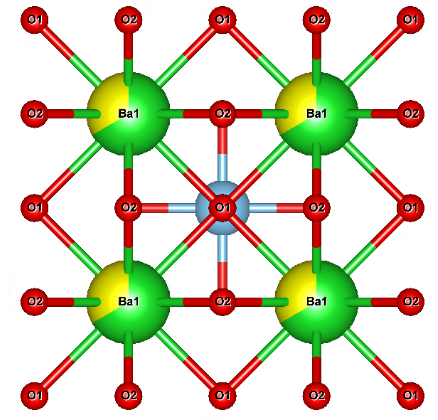 One of the ways to model such structures is to create a supercell. In this specific case a 3x1x1 supercell is sufficient. There could be many 3x1x1 supercell configurations, here is one of them with periodic boundary conditions. 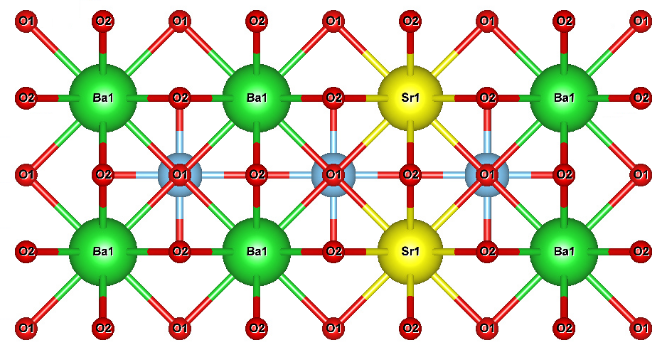 So my question is, does the atom arrangement in the real compound $\ce{(Ba_{0.67}Sr_{0.33})TiO3}$ look something like this. If it does; after the structural relaxations the $\ce{Ba}$ and $\ce{Sr}$ atoms (or $\ce{Ti}$ atoms) relax at slightly different x/y-coordinates. How do we merge such structures back to a single unit cell as shown in the first figure?

Or could there be vacancies at the A-site keeping the ratio $\ce{Ba:Sr}$ = $\ce{2:1}$. Or is it too complex to describe theoretically?

I would greatly appreciate relevant references as well.

When you get an experimental structure file that has partial occupations, as in your first figure, this implies that the occupations of the site do not have a periodic order (they are randomly occupied with probabilities determined by the occupation fractions of each ion). Otherwise, the ordering would be reflected in the symmetry of the unit cell, requiring it to be larger. Compare to something like the double perovskite $\textrm{PrBaCo}_{2}\textrm{O}_{6}$. The unit cell parameters in the partial occupations case reflect an average of the volume of material measured during the experiment.

So to answer your first question: if there is no ordering in the real compounds, then no, your cell does not reflect the real material. When you go to your DFT cell, because the size of the cell is limited for computational reasons, you are necessarily introducing some periodic ordering to the A-site cations which may not be realistic. The distortions around the Sr that you mentioned prevent you from collapsing the unit cell down to an effective ABO3 perovskite structure.

You can try to approximate the experimental structure using methods such as the special quasi-random structures (SQS) approach, where you generate a supercell with atomic arrangements that result in nearest-neighbor distributions that mimic those of a random structure. How well this works depends on whether you can use a sufficiently large cell. I have seen in the literature that when you are limited in the size of the cell you can accommodate, some researchers take several permutations of ionic ordering in the biggest cell they can manage, and take averages of the quantities of interest.

I think there are other ways of approximating alloys and doped compounds, but since I'm not as familiar with them I'll leave it for others to answer.

Not the answer you're looking for? Browse other questions tagged density-functional-theory reference-request crystal-structure or ask your own question.

18
How trustworthy is the Tran-Blaha modified Becke-Johnson potential and how does it perform across basis sets?
24
What is the largest material that has been studied using density functional theory?
29
Is there any DFT code or software that has the option to use this exact exchange-correlation energy functional?
17
How does the mBJ potential give an accurate band gap as compared to LDA and GGA?
13
How to analyze the space group of a relaxed structure that has fractional site occupancies
7
Input constraints while comparing different DFT calculated properties for the same material but different atomic arrangement
9
How does libxc calculate the potential of GGA functionals?