When we think about computers and computing today, almost invariably we think about digital computers, the ever-present objects today. But reading this question in the Chemistry stackexchange, How are the atomic orbitals for multi electron atoms obtained?, there's a great answer that delves a bit into the history of quantum theory and matter modeling, with this interesting picture, reminding us that it wasn't always like that: 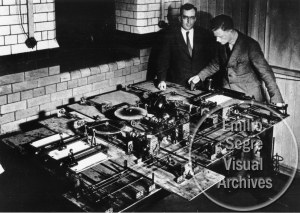 That photo shows matter modeling pioneers, Douglas Hartree and Arthur Porter, together with a computer they built themselves to solve differential equations and study quantum-mechanical systems, in the 1930s, generating tables like these: 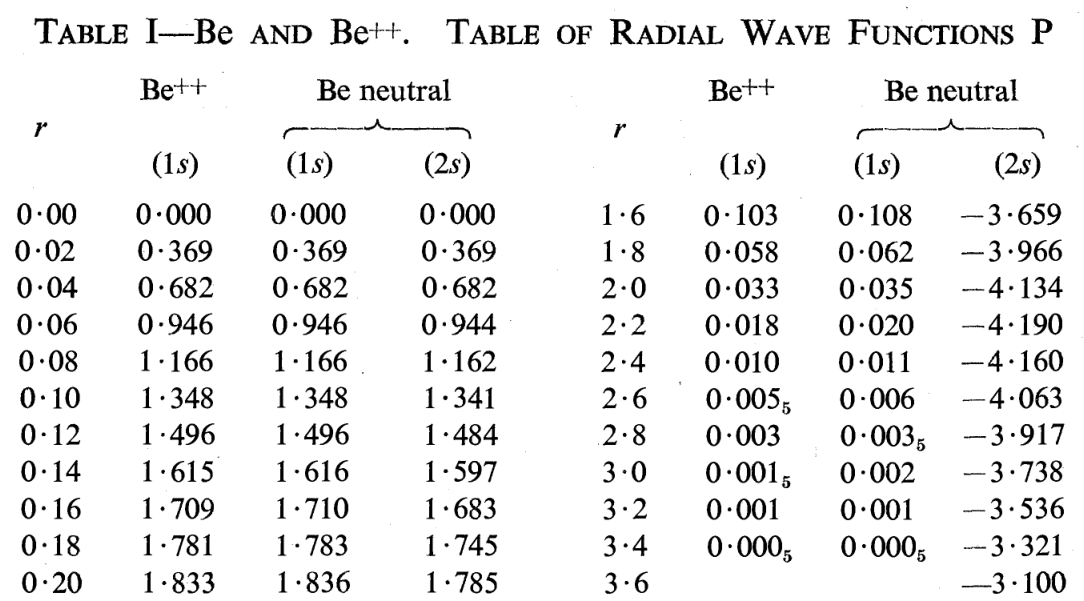 That was no ordinary computer, at least not in the sense we use the word today, because it predates digital machines like ENIAC and Colossus by several years. It was an analog computer, a differential analyser built from parts of a children toy invented in 1898, called Meccano, kind of a 19th century Lego. So Hartree and Porter pulled the equivalent to someone today building a working supercomputer from scratch, out of lego blocks, and using it successfully to do groundbreaking research. It was surely an impressive feat at the time. They were real-life McGyvers.

Before the digital revolution, analog computers like the one used by Hartree were used to tackle all sorts of hard problems you couldn't calculate by hand, like ammunition trajectories and even to put men in the moon and bring them back safely. But as time passed and digital programmable devices were developed, and then became small and cheaper, analog computers became a road not taken in science, mostly forgotten, a footnote in history.

Yet, I could find a paper (1) from the 70s showing how to solve the particle in a finite potential well with them. Also, once I watched a talk by late physicist Freeman Dyson where he says it was proven (2, 3) in 1981 that some numbers are analog-computable but not Turing-computable, and thus analog computers are more powerful than digital computers, at least in principle.

That makes me wonder, the use of Analog Computers really died out in Matter Modelling, or there's still people researching their use today, to tackle problems in the field?

I don't think analog computers are quite at the level they need to be yet, but there are people working to make them applicable to matter modeling applications.

Dr. Rahul Sarpeshkar at MIT developed simple circuits to model a particular pair of cellular protein production processes and mimic the differing pathways to the same result. They cite the continuous encoding/representation as being crucial for the simplicity of the implementation. They have also worked to address one of the biggest challenges of analog computing (the difficulty of hand crafting new circuits for each new type of problem) by developing an analog compiler to simplify going from an algorithm to a finished circuit.

Dr. Yannis Tsividis at Columbia University has worked on making analog chips that can aid digital computers in solving a problem. They found that they could obtain fast, reasonably accurate solutions to systems of differential equations. They mention the goal of passing these fast analog solutions as guesses to the digital computer, greatly decreasing the time and energy consumption needed to solve a problem. This is still a few steps away from actual matter modeling, but its easy to see how this could applied to, for example, find guesses for various electronic structure methods.

26
Which Linux distribution is best for Matter Modeling?
10
Examples of matter modeling in fiction
12
Citizen science projects in Matter Modeling
14
Optimization of Gaussian basis sets within the Hartree-Fock Method
12
Are there examples of ab initio predictions on small molecules without the "major approximations"?
26
How does the recent Chinese quantum supremacy claim compare with Google's?
24
What is matter modeling?
9
Why is the planewave codes ecosystem healthier on free/opensource software adoption, when compared to codes supporting atom-centered orbitals?
8
Suggestions on laptops for matter modeling