The supercomputer has 32 cores/node. It's a LINUX cluster linked by Infiniband, modern multicore machine. I was wondering what would be the best way to select parameters and request resources to get an efficient and fast calculation. Here are some scenarios I've considered. I'm curious what would be the "best" method (in terms of efficiency and speed).

As someone that has done a lot of benchmarking for VASP, I would suggest you try the experimental approach. I do believe VASP will add additional bands for you if need be for parallelization, so I would not worry about that personally. The layout of the node physically (32 cores on 1 processor vs 16 cores on 2 processors vs special AMD processor layouts on a single CPU) can differ significantly from cluster to cluster you cannot know what is optimal without trying.

Since you are running MD simulations it seems, I think it is well worth it to benchmark each system before you run a long simulation. Minor changes don't require you to rebenchmark but if you go from 50 to 150 to 300 atoms, the ideal may change. Run a series of quick calculations with the entire range of NCORE that seems reasonable. Use the best result. I tend to check every factor of the largest node.

I would almost always suggest requesting entire nodes unless you have a good reason to not do so. You may eventually see a KPAR option as well while looking around, I have heard mixed opinions. I have personally never got a better result with kpoint parallelization than without it. It may make a memory difference though.

I thought I would post the results of the benchmarking as per Tristan's suggestion. Maybe it will be useful for someone in the future. I only did 10 steps in the MD (1 fs step size, 10 fs total).

Obviously this may differ depending on your cluster. This is the Graham cluster on Sharcnet in Canada by the way - so hopefully it's useful to fellow Canadians out there :) 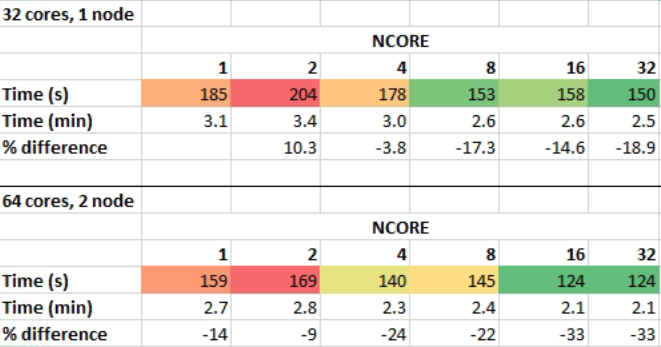 10
Choosing RAM, CPU time, # of cores, and other parameters for an MD run
10
I have access to 1000 cores across 10 nodes, what would be the best way to prallelize an MP2, GW, or RPA calculation for a periodic system in VASP?

12
Parallelization levels on Quantum ESPRESSO
12
Dealing with symmetry of ordered primitive cell during DFT structure relaxation
10
Choosing RAM, CPU time, # of cores, and other parameters for an MD run
6
What is the best setting for this workstation to speed up VASP calculations?
5
Case study: KPOINT and band parallelization in Quantum ESPRESSO
6
VASP Memory Estimate
8
Study of supercell after creating vacuum
2
NCORE bigger than 1 when performing phonon/vibrational calculation(IBRION=5) in VASP?