Why does mcsqs change the space group of generated SQS?

I made a binary special quasi-random structure (SQS) using mcsqs (distributed as part of the alloy theoretic automated toolkit (ATAT)). The structure was generated using their own example FCC input file - rndstr.in:

As far as I understand, SQS maintain symmetry. They are random, so perhaps an $L1_2$ ordered structure with space group 221 would not be an SQS, but 225 FCC is what any FCC SQS should be. Why then is mcsqs giving such haphazard results?

These are some general comments about modelling disorder which I think address your question, but note I cannot provide specifics about the codes you are using.

Imagine a simple configuration with only two sites for the discussion:

Both atoms are of the same type (blue) so that this configuration has a mirror plane down the middle of the two atoms (dashed black line). This is a symmetry of the pure crystal (think your FCC symmetry). Now imagine that we can alloy this system with another type of atom (red) in a 50-50 composition, such that the average alloy composition looks like this: 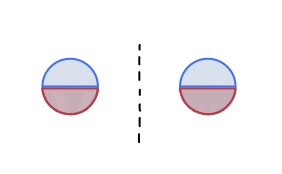 In this case, the mirror plane down the middle is still a symmetry of the alloy. This is because we are building this abstract concept of a partial occupancy of a site (half blue half red), and this is precisely what we mean when we say that an alloy has a certain symmetry.

However, the real material is not as shown in the schematic above because you cannot have partial occupancies of a given site, you either have one atom or the other. These are two examples of real configurations of the system:

You will notice that none of these obey the mirror symmetry down the middle. This is equivalent to your particular realizations of disordered supercells: none of those will obey the nominal FCC symmetry of the crystal.

So again, what do we mean by an alloy having a particular symmetry? If you consider all possible realization of disorder (none of which will in general obey a particular symmetry), this forms your ensemble of disorder realizations. If you now calculate the average over all these realizations, then you will get the "partial occupancy" picture (half blue half red sites above), which does obey the symmetry of interest.

Not the answer you're looking for? Browse other questions tagged symmetry space-groups special-quasirandom-structures alloy-theoretic-automated-toolkit or ask your own question.

21
Generating special quasirandom structures (SQS) for surface calculations?
22
Enforce a space group on a given crystal structure
11
Is the original structure invalid if it's found later that the material crystallises with a slightly different space group symmetry?
12
What does it mean to assign group operations to distinct sets for space groups?
7
Changing orientation of SQS structure generated from ATAT
6
About LaCrO3 space group stability