How to understand the crystal field splitting of d-orbitals in a trigonal prismatic geometry?

This question is coming from this paper, which investigated the spontaneous spin and valley polarizations of monolayer LaBr2.

Then the author argues that: 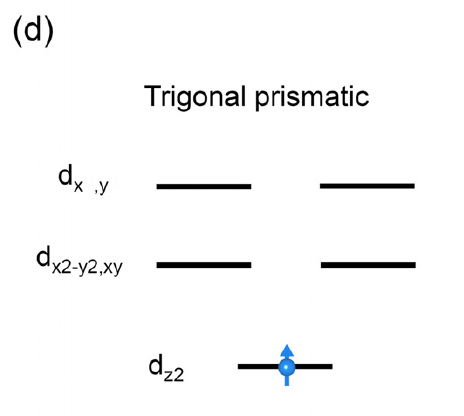 Yes. In case there are any doubts, the caption to the figure does make it clear that it's related to crystal field splitting, "(d) The splitting of d orbitals under the trigonal prismatic crystal field".

If you haven't already done so, I would recommend first working through the more symmetric case of an octahedral environment (cubic crystal field). My go-to reference for this would be the book "Physics of Transition Metal Oxides" edited by Maekawa et al., Springer (2010), but it's also treated in many other books. If you have worked through that case, it should be clear that reducing the symmetry from that of a free atom to an octahedral environment introduces an energy splitting between the $d$ orbitals, and that further reducing the symmetry may introduce further splitting. The details of how this manifests in the trigonal prismatic environment was worked out in R. Huisman, R. de Jonge, C. Haas, and F. Jellinek, "Trigonal-prismatic coordination in solid compounds of transition metals," Journal of Solid State Chemistry 3, 56-66 (1971).

Unfortunately, I'm not aware of a more pedagogical reference that covers the details for the trigonal-prismatic case. (If anyone does, please post an answer.) Hence the separate recommendation to cover the cubic crystal field first. However, if you end up going this route, do note that there is a change of coordinate system. Maekawa et al. have the $z$ axis point, towards a ligand, but Huisman et al. does not, as shown in their Fig. 1. This does change the $d$-orbital labels and the geometry, but not the overall logic. 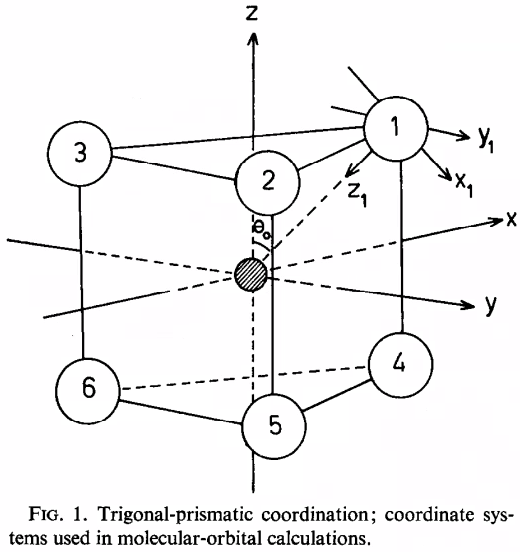 With that out of the way, let's jump straight to Huisman et al.'s results in their figure 3 (shown below). The lower states are related to $p$-orbitals, and can be ignored for our current purposes. The upper levels are related to the $d$-orbitals. On the left you have the free ion case, where there is perfect degeneracy. On the right is the octahedral case, where the orbitals split into a lower three-fold degenerate $t_{2g}^*$ manifold (involving $d_{z^2}$, $d_{xy}$ and $d_{x^2-y^2}$) and an upper two-fold $e_g^*$ manifold (with $d_{xz}$, $d_{yz}$). (I think the asterisk is just used to distinguish these manifolds/subspaces from the $p$-orbital ones.) To see that this makes sense, you can think about crystal field splitting as an electrostatics problem. The orbital has to pay an energy penalty if it points towards another ion with other electrons present. Hence the orbitals that point "between" nearby ligands have the lowest energy. 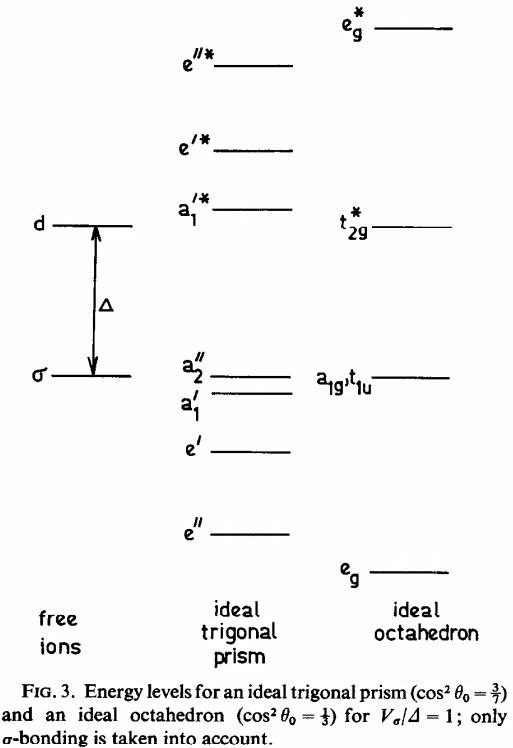 Not the answer you're looking for? Browse other questions tagged solid-state-physics crystal-field or ask your own question.

5
What is the meaning of these d states names?

17
Best partial atomic charges estimate for crystal field purposes?
8
How to calculate the orthogonal representation of a HCP cell?
8
How to perform virtual crystal approximation calculations in VASP?
11
Can crystal field splitting energy or spin-splitting energy be detected in a density-of-states plot? How?
9
Why is the planewave codes ecosystem healthier on free/opensource software adoption, when compared to codes supporting atom-centered orbitals?
7
Which software is suitable for visualizing the electron wavefunctions in a crystal?
9
How to find the Cauchy stress tensor in solids using ab-initio methods?