A clear physical picture will be appreciated.

There is a great description given of COOP in Roald Hoffman's Solids and Surfaces: A Chemist's View of Bonding in Extended Structures. It is sometimes referred to as the Overlap Population Weighted Density of States (OPWDOS) which makes the meaning a bit clearer: its the density of states, weighted by the overlap for a given bond ($c_ic_jS_{ij}$). This results in a signed DOS, as the overlap population can be positive or negative. This quantity is similar (though not exactly equivalent) to the molecular concept of bond order, where a positive COOP denotes a favorable/bonding interaction and a negative COOP indicates an unfavorable/antibonding interaction. We can see an example of this below from Hoffman's book, giving an example for a simple hydrogen chain. 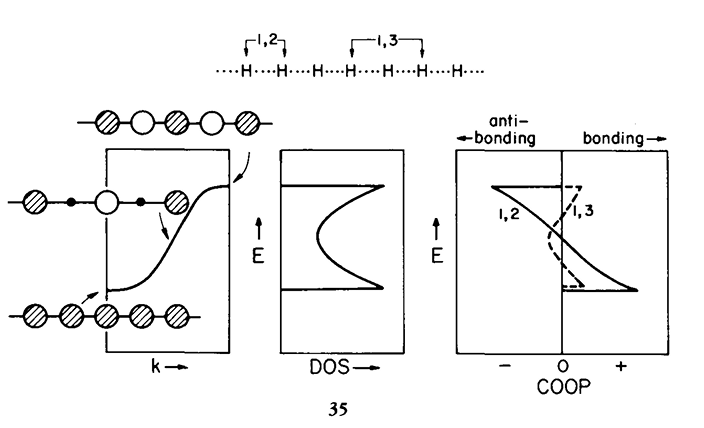 COHP, as mentioned in Kevin J.M.'s link is a variation on the same concept, where the weighting is now done based on off-diagonal Hamiltonian elements as opposed to off-diagonal overlap elements. There are apparently advantages to describing binding this way, but I haven't gotten to look at the original COHP paper to see why it is better than COOP. One difference to look out for is the COHP plots are generally actually -COHP to make them more comparable with COOP plots. This is because a negative Hamiltonian element would correspond to a favorable interaction.

Not the answer you're looking for? Browse other questions tagged density-functional-theory vasp band-structure density-of-states or ask your own question.

8
Evaluate the orbital magnetic dipole moment within the PAW sphere
12
What can we learn by inspecting charge densities calculated with DFT?
10
Does One-to-One Correspondence of Hohenberg Kohn Theorem Mean Bijective or Injective and How to Prove it?
11
How to model an anti-ferromagnetic crystal in quantum ESPRESSO properly?
12
Is there any relation between static correlation and finite-temperature smearing?
6
How can scanning tunneling microscopy images (constant current and dI/dV conductivity) be simulated? What's under the hood in software packages?
5
What is the source of this band structure and DOS inconsistency?
7
Why don't we use the principal quantum number when building the projected density of state?