k-points: Odd vs. Even

As mysterious as k-points are, why is there a cut-off for an odd and even k-mesh preference?

On the VASP wiki page titled, "Number of k points and method for smearing", they say results when using odd k-meshes shouldn't be compared to those when using even k-meshes (section: Comparing different k-point meshes). In the section "Some other considerations", they go on to say that even meshes are better up to 8 k-points in a direction while odd meshes are better beyond 8. What is the physics behind it or is it a code-level preference?

As an aside: I recently asked a question about odd/even q-points for phonon DoS calculations where I received a comment suggesting that the problem could be similar to that of k-points in electronic calculations.

The reason why even number k-point grids are prefered in the case of some symmetries like FCC lattices is mainly due to the concept of the Irreducible Brillouin Zone (IBZ).

Here is an example for FCC: 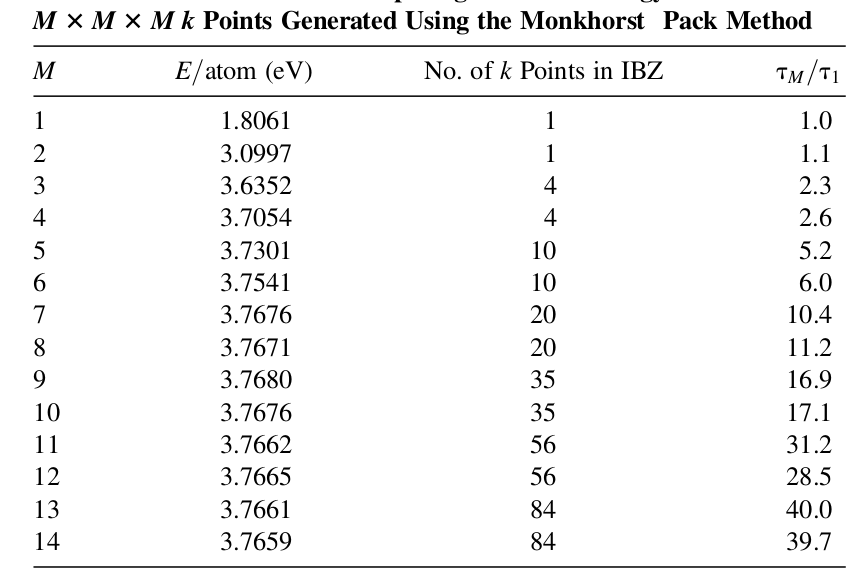 Here the number of points in the k-point grid in the IBZ is the same for even as well as odd k-points (M value). Here the points in the IBZ determine the execution speed of the code (given by tm/t1). But since the even number k-point grid have more accuracy due to larger number of k points, we prefer them over the odd values. It's like having more accuracy for the same execution speed.

Not the answer you're looking for? Browse other questions tagged density-functional-theory vasp k-points brillouin-zone or ask your own question.

16
k-points convergence for special quasirandom structures (SQS) of the same material containing different # of atoms
13
Labeling of high symmetry points in Brillouin zone
18
k-points and ENCUT convergence tests before or after relaxation?
9
k-points convergence for spin polarised vs non-polarised DFT calculations
11
Increasing supercell size to increase K-points sampling
10
How to know optimal K-points grid values for good DFT calculation?
4
Energy per unit cell in NWChem differs for different supercells despite the same k-points density
7
"A dense k mesh of 40,000 k points was used in the Brillouin zone". How is this number obtained?
13
Doubt about energy convergence with different k points
7
Monkhorst – Pack sampling: How many k points one should take