Is there any DFT code or software that has the option to use this exact exchange-correlation energy functional?

and I see that this exact exchange-energy functional is able to calculate magnetic moment of $\text{FeAl}$, $\text{Ni}_{3}\text{Ga}$, $\text{Ni}_{3}\text{Al}$ with much higher accuracy in comparison to FP-LDA for example described here. So my question is: Are these sort of exact exchange-correlation energy functionals incorporated into open-source DFT codes and are they worth using in comparison to conventional XC potentials due to the fact they seem to be more complicated and more difficult to implement? Also, when we say these are exact exchange-correlation energy functionals, what do we mean by exact? The purpose is that there is no approximation here or something else?

density-functional-theory gpaw exchange-correlation
Share
Improve this question
edited May 22 '20 at 19:23

Below is a summary of what I have found:

The question mentions the following (in order of how they were presented in the question):

However, I was indeed able to find the equations you gave, in these lecture slides!

Your quote "this exact exchange-energy functional is able to calculate..." refers to the EXX method

What was meant by "EXX method" in the linked paper?

Unfortunately I have come to learn that the authors of the paper you mentioned, did not cite the original EXX papers when they mentioned EXX:

"In this work we deploy the EXact eXchange (EXX) method, implemented within an all-electron full-potential code EXITING [8]"

or anywhere in the paper, or the aforementioned talk. Instead the paper cited a code called "EXITING" which is actually a mis-spelling of their unavailable code called EXCITING. The aforementioned lecture slides end with a page saying that the "code is available" over here, but that link leads to a 404 error. They mentioned that they had recently developed the EXX equations for their magnets, with a reference to this pre-print which after adding 1 new author and moving Hardy Gross from 3rd last author to last author, got published 2 years later in PRL.

Since the paper you mentioned was never cited, and didn't land in any journal, but refers to a paper which landed in PRL two years later, involving all-but-one of the same authors, I was curious to see how far apart these papers were written. This lead me to find out that the paper you linked was v3 of a paper whose v1 (which had even fewer authors) was actually put on arXiv 10 months before v1 of the other one. That paper actually did cite some earlier EXX papers (indicating that the authors were aware of them when they posted later versions without citation).

Summary of this section: The authors of the linked paper posted v1 of a 4-page PRL-style paper on arXiv in January 2005 with 4 authors, added 2 authors for v2 in June, removed 1 author and added 3 more (including a very famous one) for v1 of a different 4-page PRL-style paper in October (which was eventually published in PRL in March 2007 after adding 1 more author and moving the most famous one to the end position), while a v3 of the first paper was posted 1 month later never landed in a journal and never got cited. The EXCITING code is also not available at exciting.physics.at, nor at the link mentioned in the talk.

So where did the term "EXX method" originate?

At first I thought the EXX method was invented by the authors of the linked paper (hours before I tracked down v1 which did cite some earlier papers), but something smelled fishy so I looked in other places.

The 2006 PhD thesis of Michael Gibson of the reputable Durham University says in the abstract:

Since this person's PhD thesis was on this, let's proceed. He calls it the "exact exchange (EXX) functional" and cites 3 papers: one was published in 1996, another in 1997 with the same author plus 2 more, and the last in 1999 with the same authors plus 1 more.

Summary of this section: I only started doing research on this about 5 hours ago, and only to try to answer this question, but the earliest use of the acronym EXX I could find was in this 1994 paper by Kotani which credits this 1978 paper as using what the 1994 author calls "the EXX-only method" and this 1983 paper when mentioning the EXX potential for the first time. The "EXX method" has some roots in the 1976 and 1983 papers but the phrase seems to have emerged some time between 1983 and 1994. Görling and co-workers seem to have improved on the work of Kotani (though they don't phrase it that way) from 1994-1999, and they call this improvement "the EXX method", and a version of this catered to specific magnetic problems is what was used in the 2005-2007 paper of Sharma et al. linked in the question. The Görling et al. and Sharma et al. papers each gave me the impression that they invented the EXX method, but if dug deeply enough it's possible to find Kotani's paper buried in the bibliography (except in the present version of the linked Sharma paper, which doesn't cite any previous EXX paper).

Is there any software that offers "EXX" functionals?

GPAW has two implementations of EXX but your mileage may vary (their EXX might not mean the same as your EXX). They also did not provide a reference for the EXX functional that they implemented (but this does not surprise me as I have now spent almost 6 hours on this and 6 hours was perhaps not enough): 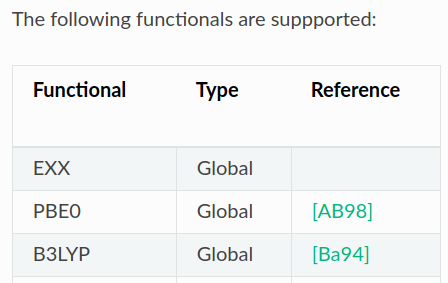 You asked if the EXX method is:

"worth to use in comparison to conventional XC potentials"?

"Exact" seems to be a buzz word that was used 103 times in the aforementioned 1983 paper, when in fact nothing is truly exact other than the "grand unified theory" (which doesn't yet exist and may never exist). At least two groups of authors seem to have misleadingly claimed to invent exact-exchange methods, one group in the 1990s and one group in the 2000s, but the paper you linked which claimed higher accuracy compared to FP-LDA never survived peer review, has never been cited, and was performed with software that is unavailable.

I therefore see no evidence yet that the EXX method you linked to is actually better than the conventional XC methods you mention. DFT is a highly approximate method anyway, and nothing is exact. DFT is notorious for sometimes giving good results for the wrong reasons, so one single paper showing a better accuracy than one other paper, does not convince me that any method is better in general. However I am not a DFT expert: I am just someone who accidentally tried to answer this question because I wanted to clear up the "unanswered" queue, and 6 hours ago I thought the answer would be easy!

Whenever you see EXX, a warning flag should go up inside your head. It is never clear whether one means just using Hartree-Fock exchange in a DFT calculation, implying a generalized Kohn-Sham scheme with a fully non-local potential, or if one means an optimized effective potential approach in which the exact Hartree-Fock exchange energy is inverted to find a local exchange potential v(r) that is then used to calculate the orbitals. Most of chemistry uses the former approach, e.g. the (in)famous B3LYP functional, per Becke's 1993 proposal of mixing HF and DFT in 10.1063/1.464304.

Not the answer you're looking for? Browse other questions tagged density-functional-theory gpaw exchange-correlation or ask your own question.

9
'Exchange' in Hartree-Fock and Kohn-Sham DFT

18
How trustworthy is the Tran-Blaha modified Becke-Johnson potential and how does it perform across basis sets?
30
What are the positives and negatives of periodic DFT codes that don't use plane-wave basis sets?
21
In DFT, while studying a system using different exchange-correlation functional approximations, are we expected to check convergence for each method?
8
Parameterization in the generalised gradient approximation (GGA)
12
What's the physics contained in the exchange-correlation functional in the framework of KS-DFT?
7
What correlation effects are included in KS-DFT with LDA and GGA?
9
'Exchange' in Hartree-Fock and Kohn-Sham DFT
9
Why does the PBE XC functional not appear to be a sum of exchange and correlation energy?
8
Replacement from minimizing the energy to solving the KS equation (or eigenvalue problem)
10
Non-Convergence of the XC functional in the sense of a Taylor series