On the nature of zero-point energy (ZPE)

The harmonic approximation gives a non-zero kinetic energy at 0 K for which Heisenberg's uncertainty principle is used as an explanation. A particle at 0 K couldn't be stationary because that would violate its wave-like nature.

Then there is the talk of zero-point potential energy. By the virtue of its existence, a particle with a finite mass would hold some energy within itself irrespective of being or not being in motion.

The first is easy to understand. The second, though, it would make sense only if the particle was in some field that exerts potential on it. Are there implications here that come from theories that a casually thermodynamics-educated person wouldn't comprehend?

Also, am I right to assume that the term zero-point energy, when used in atomistic modeling literature, is used solely to mean the first kind described above?

In the Born-Oppenheimer approximation nuclei are assumed to behave as classical point-like particles. However, in reality the wave-particle duality also applies to them, and so the Schrödinger equation should also be solved for the nuclei $I$ in the potentials $V^I({\bf R})$ generated by the electrons.

The zero-point energy is simply the energy of the nuclear wave function's ground state. The ground state is stationary, since it is an eigenfunction of the Hamiltonian. However, as a quantum mechanical wave function, it naturally has both kinetic and potential energy.

The concept of "motion" does not make sense within the generally accepted Copenhagen interpretation of quantum mechanics.

The Born-Oppenheimer (BO) approximation works well at high temperatures (far from 0 K), but the quantum nature of the nuclei (i.e. the zero-point energy) is an important consideration at low temperatures.

A great example of this is the difference between the Einstein and Debye models of a solid.

In the Einstein model, the nuclei are treated as identical independent 3D quantum harmonic oscillators (masses fixed to springs attached to an imaginary rigid lattice. If you use this model to predict the heat capacity of a solid, you will find it goes exponentially to zero as $T\to0$. This did not match experiments.

In the Debye model,, the nuclei are attached by springs to each other and undergo collective oscillations. The collective excitation of this interacting system are phonons and the predicted heat capacity decays to zero at $C_v \propto T^3$, which matches experiments. 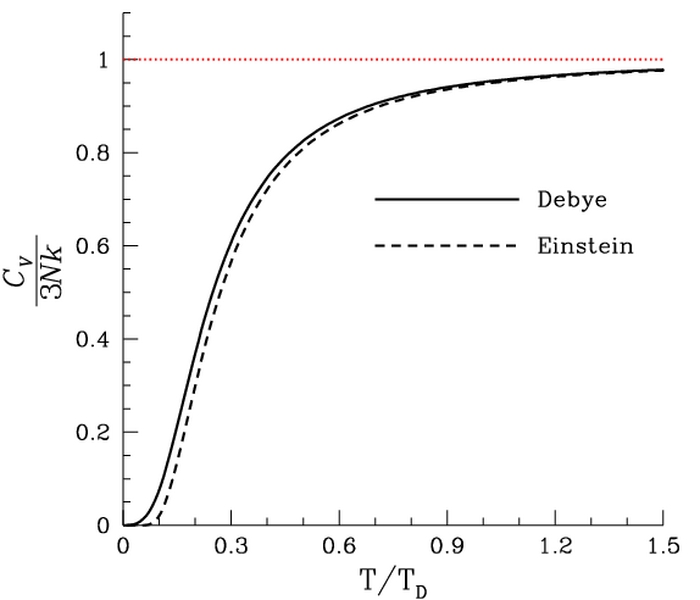 Not the answer you're looking for? Browse other questions tagged temperature zero-point-energy harmonic-approximation or ask your own question.

16
Does the thermal evolution of molecular structures critically affect the validity of the calculated magnetic anisotropy?
9
VASP output energy
12
Converting adsorption binding energy to absolute temperature
9
Is there an upper limit of temperature after which the quasi-harmonic approximation (QHA) fails?
7
Quantum harmonic oscillator, zero-point energy, and the quantum number n
5
Supercell model for a disordered system in phonon calculations using the harmonic approximation