How many spin states do Cu+ and Cu2+ have and why?

However what they might not say in your textbook is that quantum states can exist also in superpositions such as: $a|\frac{1}{2}\rangle + b|-\frac{1}{2}\rangle$, as long as $|a|^2 + |b|^2=1$. You can have an infinite number of superpositions parameterized by $\theta$ if we set $a=\cos\theta,b=\sin\theta$. You can have even more types of superpositions (parameterized by another angle $\varphi$) by adding a factor of $e^{\rm{i\varphi}}$ to either $a$ or $b$. Superpositions don't tend to last long though, due to decoherence, so it's not common to say that "there's an infinite number of possibilities for the spin state".

Furthermore, even when we have 1 electron up and 27 down, there's 27 different choices you can make for the up electron, so there's actually $2^{28}$ possible spin configurations, though many of them would not last long because of orbital angular momentum considerations (i.e. filling up the $2s$ orbital first, before the $2p$ orbitals), and many of them will be equivalent in energy due to symmetry.

If you are wondering which states have been observed experimentally, you can see at the NIST website that there's quite a lot of them but the first state with a spin of +2 is more than 5x higher in energy than the first state with spin +1, which is about 22000 cm$^{-1}$ in energy above the state with spin 0 (i.e. 14 electrons up and 14 electrons down), so without a laser or a very high temperature, you are most likely to find this ion in the spin 0 state: 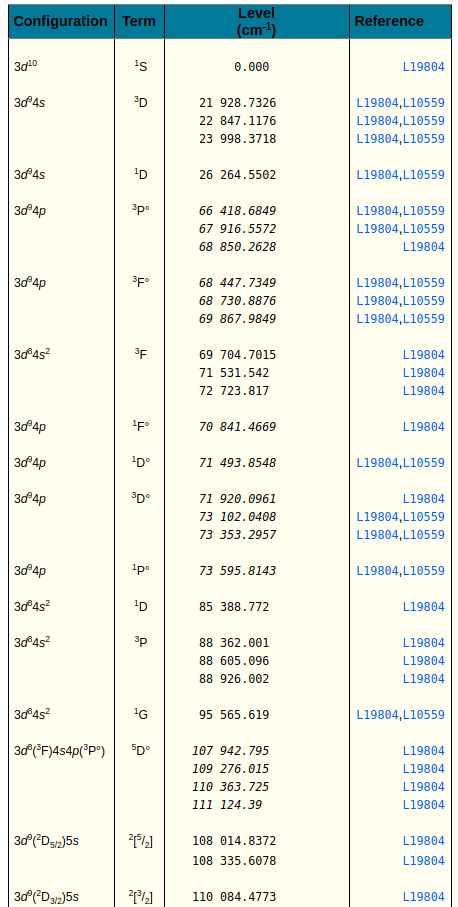 Now we have 27 electrons, and 28 possibilities for the spin projection quantum number. We can also have an infinite number of superpositions, but we usually don't talk about those. NIST tells us that many different states have been observed, but every single one of them seems to have a spin projection quantum number with magnitude of 1 or 3, but unlike for $\ce{Cu}^+$ where there was multiple studies all the way up to the year 2017, for $\ce{Cu}^{2+}$ they all come from the same 1990 reference. Here's the first few:

In reality it's not just the electron-spin and electron-orbital angular momenta that couple to each other, and there's also nuclear-spin and nuclear-rotation, and even nuclear-orbital angular momentum, and surely even more than that, which can also be considered, which means that even $J$ is probably not a "good quantum number" in a grand unified theory of everything, but in maybe 90% of scientific applications it's okay to just consider spin, and in maybe 99.9999999% applications it is okay to use $J$ (that means that maybe only 1 in every 1 billion scientific studies would require one to go beyond using only $J$, in fact maybe it's less because I don't know of any studies at all that go beyond just using $J$ though they may exist in studies that are specifically trying to look at when the $J$ quantum number breaks down).

Note that $J$ is always a better quantum number than $S$, so there's cases where $J$ can be used and $S$ would not be a good idea to use, but there's never a case where spin is a good quantum number and $J$ is not (though using $S$ without $J$ may be better for simplicity and presentation in cases where $J$ is not absolutely necessary for the point being conveyed, e.g. for low-accuracy spectroscopy of an atom with low enough mass that relativistic corrections are not necessary, and spectroscopy at such low-resolution that fine and hyperfine structure are not visible).

Chemists tend to look at this through the lens of Ligand Field Theory, which is basically a minimal basis Linear-Combination of Atomic Orbitals (LCAO) scheme to qualitatively describe bonding in a molecule. A full summary of this approach is more than I could fit (or reliably convey here), but I can give a very stripped down summary.

For metal complexes, the spin state is affected by:

The symmetry of the molecule leads to a particular arrangement of Molecular Orbitals (MOs), which affects how stable a given spin state would be. For example, many metals complexes are octahedral, which leads to a frontier orbital arrangement like the picture below.

The number of d-electrons affects how many of these orbitals are filled. For example, $[\ce{Cu(H2O)_6}]^{2+}$ would fill 4 of these orbitals and half fill the last since $\ce{Cu^{2+}}$ has 9 valence electrons. This would leave us with one unpaired electron, resulting in a spin multiplicity of 2.

The attached ligands can also play a role in determining the spin state. Considering the octahedral splitting again, the ligands affect how large the gap is between the upper and lower set of orbitals. The splitting effect competes with the energy penalty due to Coulomb repulsion of putting electrons in the same orbital. Consider the example of a metal with 5 valence electrons, say $\ce{Fe^{3+}}$. Depending on the ligand, the complex can either be low-spin or high-spin.

In a low spin complex (e.g. $\ce{[Fe(NO2)6]^{3-}}$), the splitting is large, so it is more energetically favorable to pair electrons than to "promote" them to the upper orbitals.

For a high spin complex like $\ce{[FeBr6]^{3-}}$, the splitting is small and so it is more energetically favorable to "promote" electrons to the upper orbitals than to pair them.

Getting back to your example, $\ce{Cu+}$ and $\ce{Cu^{2+}}$ tend to form singlet and doublet spin state complexes, respectively. The reason for this lack of variety is that, even with different ligands altering the splitting, there are still 10/9 electrons that need to fill into these 5 orbitals and there just aren't different ways to arrange them without occupying higher energy orbitals.

Not the answer you're looking for? Browse other questions tagged transition-metals from-chem-se spin-orbit-coupling spin metal-complexes or ask your own question.

12
What do we mean by spin-splitting energy?

12
Total spin and/or multiplicity for transition metal ions?
11
Spin density in systems with non-collinear magnetism using VASP
10
Spin orbit coupling from spin polarized density of states?
11
How to understand the spin of exciton?
8
Why can't we change the spin angular momentum of electrons with an external optical field?
9
Can I have a bond formed for only one spin?
11
Can crystal field splitting energy or spin-splitting energy be detected in a density-of-states plot? How?
12
What are the references in multi-reference methods?
6
How to find out the multiplicities of molecules containing d and f block species?