Before taking the deep dive (see linked questions below) into calculating the diffraction of 20 to 200 eV electrons from crystal surfaces, I'd like to generate a simple "muffin-tin potential" (see below) from some simple analytical approximation that roughly matches what might be calculated as the electrostatic potential that an incident electron would feel passing through a mid-sized atom (hydrogen << atom << uranium) arranged in a crystal.

I can start to learn how to calculate phase shifts and angular distributions with this.

Wikipedia's Muffin-tin approximation talks about this but doesn't offer any equations out-of-hand.

The zeroth order approximation would be a nuclear positive point charge and a uniform sphere of negative charge and I can certainly start with that; with vague uniformity argument based on the exclusion principle. A flat "inner potential" of 5 to 15 eV is often assumed between atoms in this context. At small distances it would have to be flattened since near the nucleus it goes to infinity.

Question: But is there a somewhat better approximation than that available? 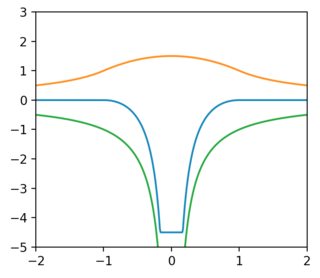 Cross-section through a "one-muffin tin" made from a uniform $r = 1$ electron sphere and a point nucleus, arbitrarily flattened at the bottom. These would be arranged in space at each atom's location and a constant potential would fill the space between them.

Long term goal for background only:

The values of the potential $V(r)$, the wavefunction $\phi(r)$, and the electronic density $\rho(r)$ are matched at $r = r_\mathrm{MT}$ to ensure that the derivative exists for each of them. 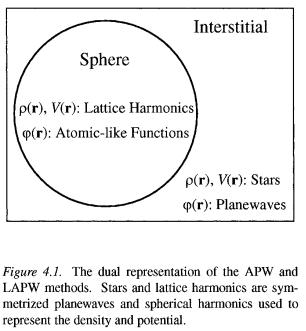 On solving the non-relativistic Schrödinger equation, the same book remarks the following in ch. 5, p. 63.

These differential equations [the radial Schrödinger equation] may be solved on the radial mesh using standard, e.g. predictor-corrector methods.

Anyway, I personally don't think solving the radial Schrödinger equation is too computationally expensive, given the current state of computers. But if you want to avoid it at all costs, there is the Kronig-Penney model, which is a lot simpler at the expense of accuracy.

Not the answer you're looking for? Browse other questions tagged pseudopotentials diffraction electron-diffraction or ask your own question.

12
Overview of how self-consistent dynamical low-energy electron diffraction simulations are performed
17
What is the difference between Ultrasoft, ONCV and PAW Pseudopotentials? Which is better for a spin-orbit coupled calculation?