Interpret 2D and 3D data from a PubChem summary of organometallic molecule? Can I "flatten" it when showing on a surface?

I need to "build" an organometallic molecule in Blender/Python then represent it resting on a crystal surface.

I'm looking at a PubChem summary for Chloroaluminum phthalocyanine and I can download some JSON files and generate a crude plot for it.

According to the description this is a calculated shape and size and for my purposes that sounds like it should be close enough for me for now, as much as +/-5 % is acceptable at the moment. I just want to see roughly how large this molecule is.

I am assuming that the coordinates are in Angstroms, but I can not find anything that says that explicitly here.

The problem is that the 2D JSON shows it to be about 11 Angstroms from one end to the other, but the 3D JSON shows a molecule that will be more like 16 Angstroms when stretched out.

That substantial difference suggests I can't yet assume those coordinates are what I think they are, so I'd like to ask:

Question: How can I interpret the 2D and 3D coordinates of atom locations from a PubChem summary of an organometallic molecule? Which of these JSON files should I use? The molecule's "arms" are shown bent in the 3D representation, am I free to "flatten" them to show the molecule laying flat?

note: This is for illustration/animation purposes, not for deriving information about interaction. 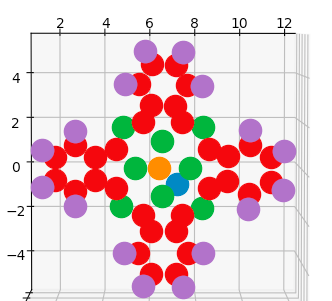 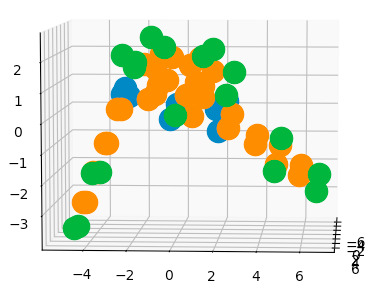 A three-dimensional representation of the compound. The 3D structure is not experimentally determined, but computed by PubChem. More detailed information on this conformer model is described in the PubChem3D thematic series published in the Journal of Cheminformatics. 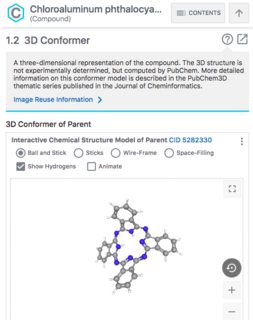 This is because the ligand is engaged in complexation of the Al in the centre. This fixation prevents much of the possible distortion of an empty ligand if a website constructs a 3D model from scratch with some (computationally cheap) force field to identify one plausible conformer. Of course the two (here randomly attributed) protons in the centre equally want to minimize steric interaction, too:

If you are interested into the coordinates experimentally determined, I would suggest to consult a crystallographic database. If you are within a university, CCDC's CSD database may be one resource much more comfortable to search than this because of its interfaces including conquest, and CSD Python API (a primer, the CCDC moderated user forum (since July 2021 read-only)). The structures may be exported in the .cif format; if you are fine with loosing some of information, however, exports as .pdb, .mol2, .xyz and SMILES strings are equally among the offered formats which may be processed further, e.g., by OpenBabel. Compared to other chemistry relevant databases, and taking into account the broad scope of applications, it is a smaller yet well affordable databases. Often, research groups join each other under stewardship of a library to purchase e.g., 5 FTE at once, and subsequently share IT infrastructure and license fees.

Complementary to CSD (about small organic and organometallic), and ICSD about inorganic materials is the COD with some overlap of coverage with the two former. Their access policies differ from the former and actively encourage share and mirroring of the data. There is are GUIs to search in this repository (e.g., by text, or structure) but equally offers an API and a number of helper programs (cod-tools) like codcif2sfd to convert a .cif into a chemically healed .sdf to support programs like DataWarrior as optional add-on.

Not the answer you're looking for? Browse other questions tagged molecular-modeling python databases or ask your own question.

18
What are some servers that are able to host and share our research data?
11
Unable to recreate data for benzene from paper in GROMACS 2020.5
9
How to make a python code that can read a .xyz file and find distance, angle and dihedral angle between atoms?
10
Programs/Libraries for calculating solvent excluded surface and excluded volume
10
Is there a free online repository where I can download X-ray diffraction (XRD) data?
10
Is there a database where one can find the Electron Density data of materials?
7
How to process electron-density data from a CHGCAR for better handling?
6
How to read data from an input and form two-electrons integral?
5
How to alter the charge and multiplicity of a molecule in Gaussian?