Has a form of diamond with certain properties ever been theorized?

The following is what a Penrose tiling looks like: 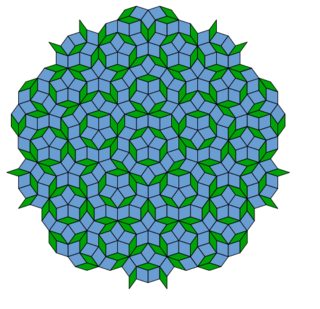 Has there been a discussion of whether that is mathematically possible according to the Dalton model or something like that, which can easily be found?

That was my question. The rest is just facts I want to share.

Diamond has 4 weak cleavage planes. Lonsdalite has 1. In either case, the cleavage plane is where there is only single bonds going through it perpendicular to it. If that form of diamond existed, it would probably have no such plane and therefore would probably have a higher fracture toughness when you apply tension in the direction perpendicular to the weakest cleavage plane or something like that. I think English is a bit flexible and they don't make the definition of fracture toughness that precise.

I read on the internet about other covalent networks of carbon atoms that do have strained bonds, which included on that resembled a tessellation of the truncated octahedron. I already know about those discussions and am not interested in an answer that talks about that or any form other than the very specific form I was asking about here.

Also, according to the Wikipedia article Quasicrystal, quasicrystal lacks periodic symmetry. It also says there are some quasicrystals in nature. I'm not sure they really are truly aperiodic. 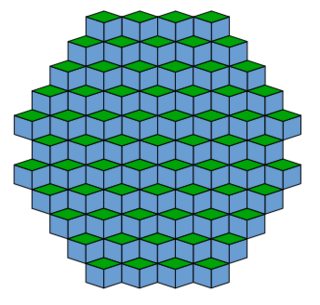 shows that you can take part of the Penrose tiling and turn it into a primitive cell. Maybe nature also takes part of what a true dodecahedral quasicrystal would look like and makes it into a primitive cell, but has the primitive cell large enough to include 5 subparts that have the relative orientation to one another like the 5 tetrahedra whose verticies form the verticies of a dodecahedron. The Wikipedia article Silicon nitride has an image with a description saying it is the $\alpha$ phase of $Si_3N_4$. It also looks disordered. If you take that unit cell and turn it into a torus, maybe it can be split into 1 or multiple primitive cells each of which could be part of a quasicrystal and has 5 small parts that have the relative orientations of 5 tetrahedra that make a dodecahedron.

There are two related structures.

Dodecahedrane is known - $\ce{C20H20}$ in which the carbon atoms form the lattice you described, with hydrogen atoms on the outside.

As for your discussion of quasi-crystals, I think it's well established that there are indeed, aperiodic structures. The Nobel Prize in Chemistry in 2011 was awarded to Dan Shechtman for their discovery (and battle to ensure recognition).

7
Can replacing some of the atoms in a covalent network with that of the element one atomic number higher make it nonstick?

10
How can I quantify the uncertainty of thermal molecule properties in molecular dynamics simulations?
3
Can corundum be considered a covalent network?
7
Is it possible to get complex numbers as solutions for a secular determinant in simple Hückel method (SHM)?
2
Has it been researched whether face centered cubic carbon is stable?
19
Are there dashboards displaying experimental properties of molecular materials?
9
Functional derivative of energy with respect to density