Spin considerations for the bandgap and optical excitations

What are the consequences for the bandgap if the conduction band edge and valence band edge are contributed by different spins? Are there any driving forces that prevent an excitation from spin up to spin down for example? Will this be significantly affected by spin-orbit coupling?

I suspect this gets much more complicated considering the noncolinear spin case, but I only wish to consider the colinear case currently.

I don't think we need to talk about driving forces (this sounds esoteric) instead calculating the selection rule:

As the spin is directional, the corresponding spin wavefunctions are odd. This directly implies that a transition where the spin "directions" are different, will result in $P_T = 0$ and then, are considered as forbidden transition.

Relaxation of this rule (i.e. $P_T \neq 0$) can occur with the presence of spin-orbit coupling, vibronic coupling and/or $\pi$-acceptor/donnor mixing with d-orbitals.

If you have an odd number of electrons or anything else that break the system symmetry, you will/can have separated bands for the spin-up and spin-down configurations. This implies having two different bandgaps. You can explore this feature using your material as the core of spin-filter in spintronics, for example.

The image bellow correspond to a boron-nitride nanotube interacting with a Ni atom. 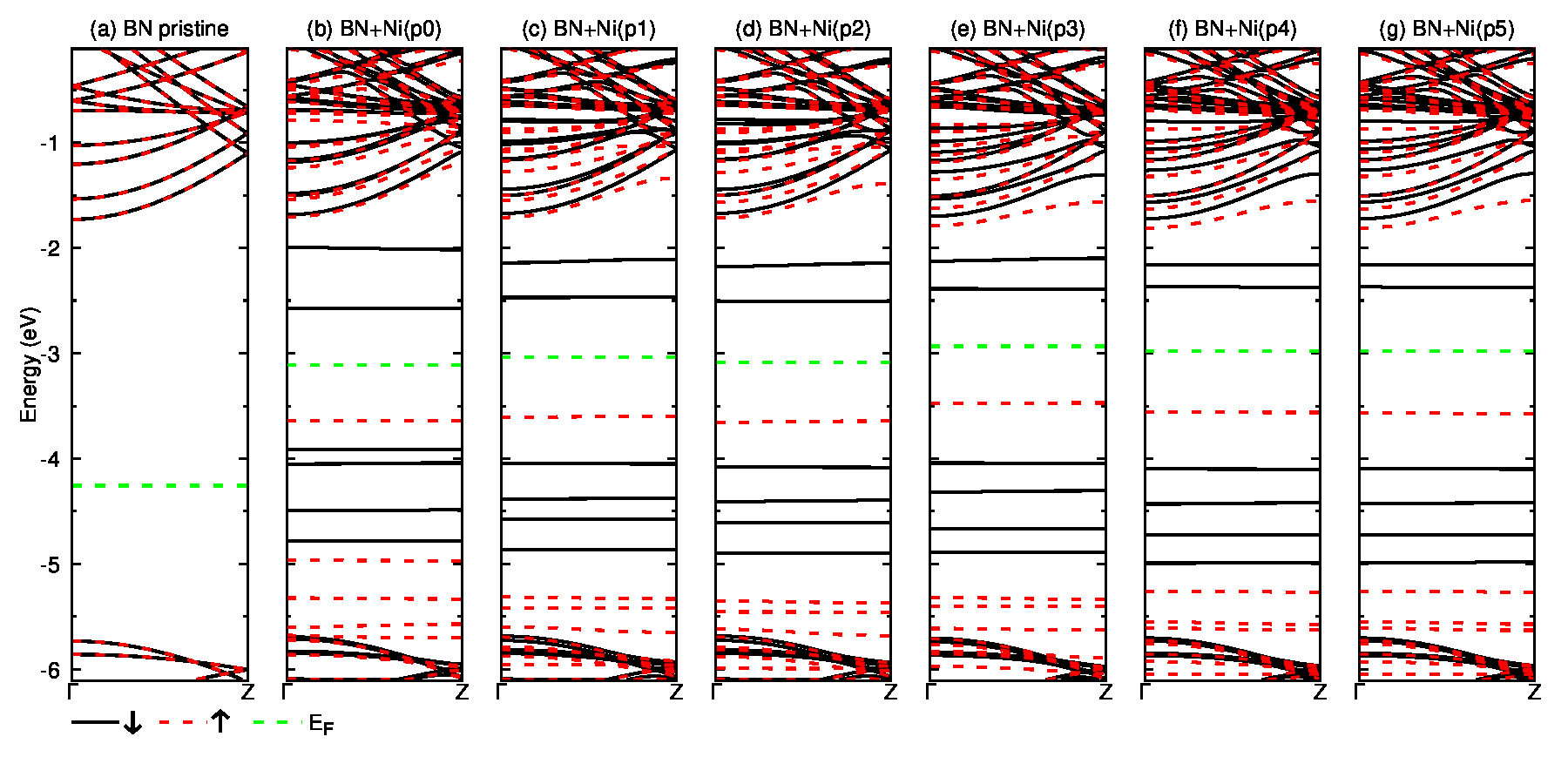 The energy band of materials when the spin is involved (magnetic/nonmagnetic) are usually classified as follows: 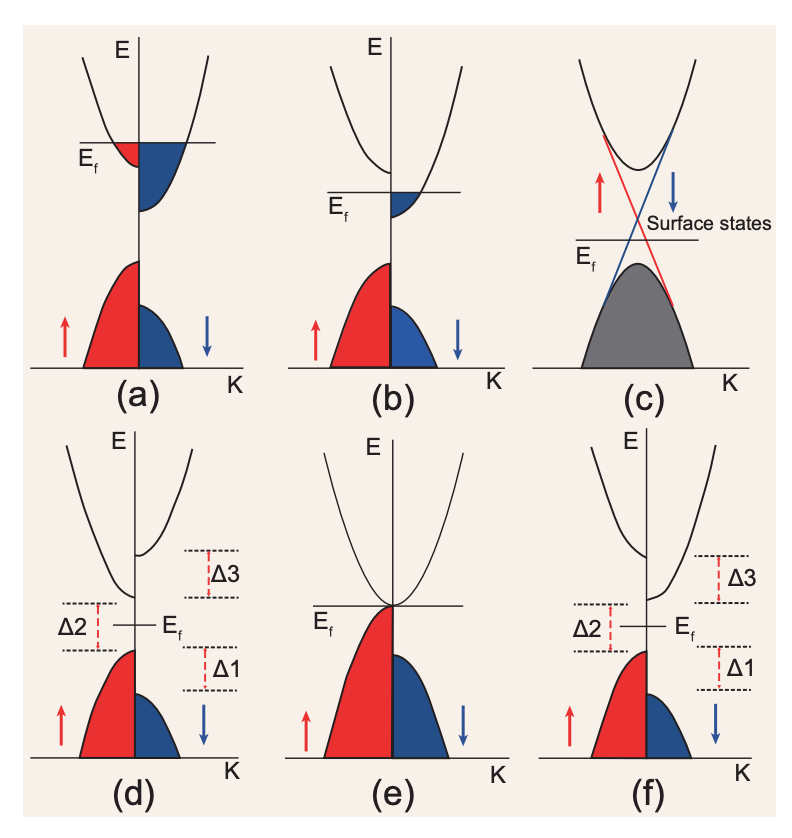 Here I assume you are talking semiconductors, namely (d) and (f) in the previous screenshot. Essentially, the bandgap is decided by the position of the Fermi level. Interestingly, you will meet some materials in which the spin-up channel is metallic whereas the spin-down channel is a semiconductor. This is an important consequence of spin-involved band structure.

This question is explained by @Camps. The transitions from the valence band to the conduction band are related to the properties of bandstructure and wavefunctions, such as minimal direct gap, the overlap of the electron and the hole wavefunction, and symmetry of wavefunction. The information from the spin will also be reflected in the wavefunction.

As for the bandgap, the spin-orbit coupling (SOC) will host a significant influence (more than 0.5eV) in some materials with heavy atoms, such as BiI$_3$ and BiTeI:

In addition, the SOC will influence the optical excitation in some nonmagnetic materials with heavy atoms. For example in TMDC monolayers, the spin-$z$ component is a good quantum number due to the interplay of lattice inversion symmetry and strong SOC, which will lead to the selective photoexcitation of carriers with various combinations of the valley and spin indices. 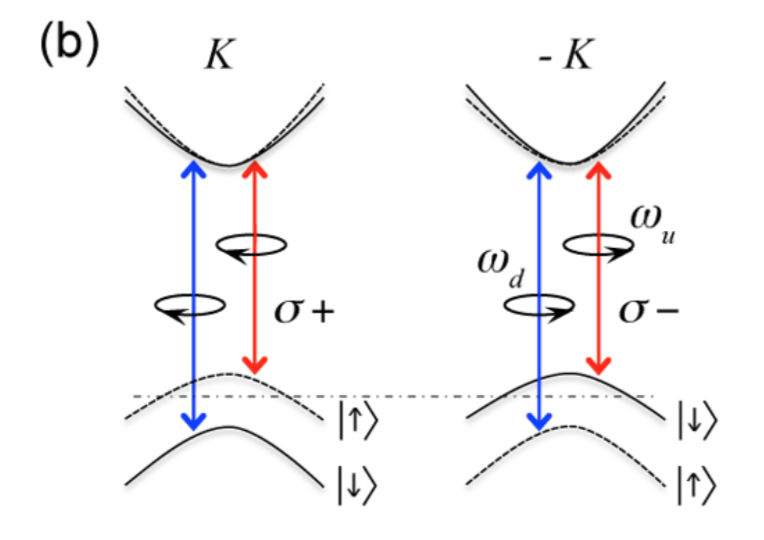 Not the answer you're looking for? Browse other questions tagged band-structure density-of-states spin spintronics or ask your own question.

14
Tools for Valleytronic Research
16
How to separate the data plot for spin up and spin down band structure into 2 different graphs, in Pymatgen?
13
How many spin states do Cu+ and Cu2+ have and why?
11
How to understand the spin of exciton?
8
Why can't we change the spin angular momentum of electrons with an external optical field?
12
What do we mean by spin-splitting energy?
11
Can crystal field splitting energy or spin-splitting energy be detected in a density-of-states plot? How?
10
What is the difference between a half metal (HM) and a spin gapless semiconductor (SGS)?
4
Density functional theory and oxygen spin
5
What is the source of this band structure and DOS inconsistency?