How do I figure out how many monomer configurations I need for my simulation?

I am running a quantum mechanical simulation on Psi4 for a certain number of monomers to generate data for a database. Some of these monomers are short, while some are long.

At the moment, I am generating .pdb files for these monomers using their SMILES string, and using OpenBabel's genetic algorithm to generate possible optimal conformers to use for my simulation.

Now obviously, if I could, I would generate as many conformers as possible for my monomers and throw them in Psi4 to generate all-encompassing data for them. However, since these computations are expensive, I can't do that and I have to budget my computational resources.

I want to figure out a way to ballpark how many conformers do I need to evaluate for each monomer. How would you go about finding an estimate?

For example, say you had something small, like isoprene, and something larger, like benzyl methacrylate. How many conformers would you make for each of them? Is there a combinatorial argument you can make regarding torsional strains (or something) that you can use to get an estimate?

Any advice you have would be appreciated.

tldr; it depends on flexibility / number of rotatable bonds

A while ago, I answered a related question - in general, molecules with fewer "rotatable bonds" need fewer conformers geometries generated to sample properly.

Based on that, I would normally have said "50 is more than enough for up to 3-4 rotatable bonds" and beyond that, I'd guess somewhere around 250-500 depending on molecule size. (It's hard to do an exhaustive search for 20 rotatable bonds.. in principal, the rough rule-of-thumb has been $3^n$ or ~3.5 billion possible conformers.)

More recently, we published a preprint after studying over 120,000 small molecules and ~12 million conformers. 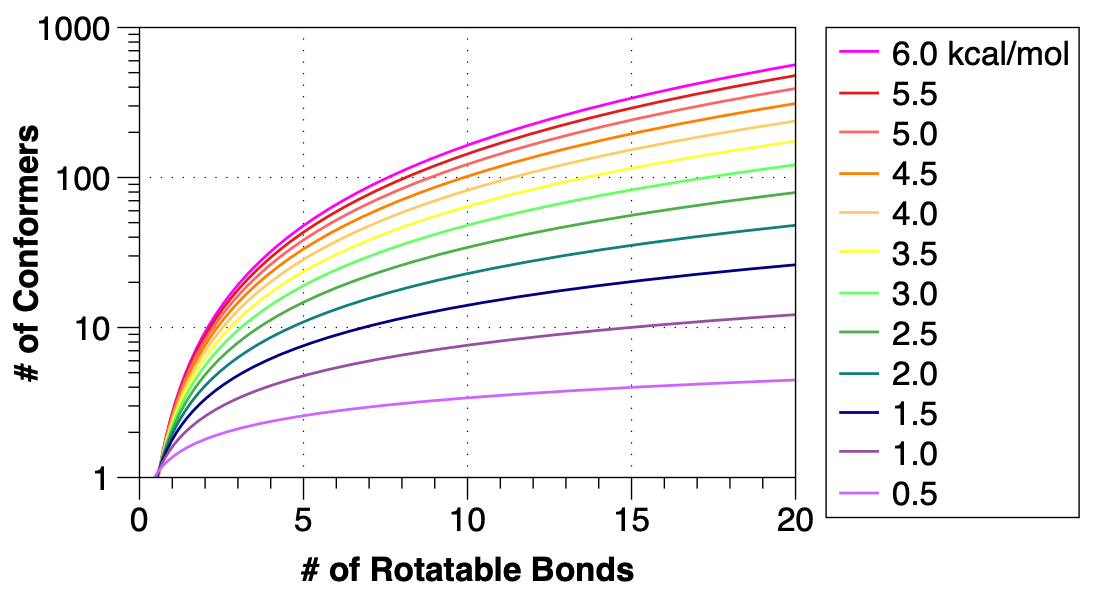 My suggestion - and what we're doing in the group now, is to generate a 3D geometry of your molecule. (Open Babel works fine. RDKit works fine. Avogadro works fine. No bias here.)

Then you should likely do a conformer search using some type of quantum method. Our recent paper shows that GFN2 (or ANI-2x) have fairly good correlations with quantum methods.

The Grimme group has made CREST and XTB open source and they're quite easy to use. We're working on more efficient methods, but with CREST, you'll get a file with all conformer geometries within 6 kcal/mol of the minimum.

You can then use those conformers for further calculations.

As other people have mentioned, it may depend on how much your properties vary with conformer geometry. But this approach ensures a fairly robust, arguably exhaustive search with GFN2 (better than a force field).

What you use for the constant c depends on your application, i.e., how dense a sampling of configurational space you want/need to perform, but for most applications I'd guess a value of n somewhere between 10 and 20 should be enough.

Also, I seem to recall that, with default options, the algorithms used by openbabel automatically restrict the total number of generated conformers to something reasonable. If, for example you ask it to generate 1000 conformers for a small/rigid compound like benzene it will only give you a much smaller number than that.

Not the answer you're looking for? Browse other questions tagged computational-chemistry quantum-mechanics psi4 or ask your own question.

6
Velocity operator for a Hamiltonian that satisfies the generalized Schrodinger equation
8
Simulation of electronic potential from nanoparticles interacting with molecules
9
What is the procedure for constructing an ab initio potential energy surface for CH3Cl + Ar?
9
Using OpenBabel or RDKIT Python API to generate conformers from a SMILES string
9
Error running psi4 on charged molecules
10
How can we say that the KS equation is describing a noninteracting many-electron system?
5
Ground State energy trick for many-body electronic structure calculations?