How to perform band-structure unfolding in VASP?

I have created a band structure for 3x3x1 doped-supercell using VASP, and I obtained the figure below. Now I want to do band-unfolding. What are the simplest ways to do that ? 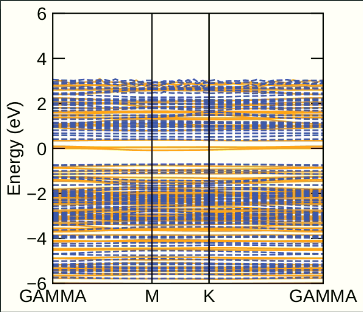 From the $3 \times 3 \times 1$ supercell and the $\Gamma-M-K-\Gamma$ path, I assume that you are investigating the band structure of a two-dimensional material with a hexagonal structure. Therefore, maybe the simplest way that you can follow immediately is using the VASPKIT package.

Coincidently, the example tutorial is about monolayer MoS2: https://vaspkit.com/tutorials.html#band-unfolding

This software can help you. From the developers site:

BandUP is a code that allows you to obtain a primitive cell representation of the band structure of systems simulated using supercells. The unfolding of the bands is performed as described in the following papers:

Information about the code: http://www.ifm.liu.se/theomod/compphys/band-unfolding/

Not the answer you're looking for? Browse other questions tagged density-functional-theory vasp band-structure or ask your own question.

16
How to ensure a smooth band structure?
13
How to analyze the space group of a relaxed structure that has fractional site occupancies
12
mBJ-LDA band structure calculation using VASP
11
How to start with structural defects in monolayer?
8
Supercell band structure unfolding advantages
4
How to interpret spin density isosurface figures?
5
What is the source of this band structure and DOS inconsistency?