What is a good replacement for Gaussian?

When I started studying computational chemistry (circa 2007), my supervisor used to tell me about the controversy surrounding Gaussian, Inc. regarding the banning of researchers involved in the development of competing software (there is a very famous paper in Nature about that). He didn't care much about it, said it was possibly a hoax and openly defied Gaussian's licensing terms because he thought he would not be punished and that the scientists who created the anonymous website bannedbygaussian.org were just disseminators of fake news.

Eventually came the day when my advisor published an article in which he compared the computational efficiency of Spartan with that of Gaussian in simulating a PAH he was studying. A few months later, he was surprised to receive a notification (when it was time to renew the license, if I remember correctly) that both he and his coworkers were no longer allowed to use Gaussian. At the time he was already retiring and was not too worried (he died in 2018). However, he deeply regretted doubting the anonymous community of scientists who created bannedbygaussian.org. By that time, I had just left the academic world, but in any case I promised myself that I would not use Gaussian software anymore.

Long story short, recently I am considering returning to computational chemistry studies and I am not aware of software that can replace Gaussian. As I have not been in contact with matter modeling for many years, I would like a suggestion from the community so as not to have to break my promise, honoring my late advisor.

ORCA is a general-purpose quantum chemistry program package that features virtually all modern electronic structure methods (density functional theory, many-body perturbation, and coupled-cluster theories, and multireference and semiempirical methods). It is a flexible, efficient, and easy-to-use general-purpose tool for quantum chemistry with specific emphasis on spectroscopic properties of open-shell molecules. It features a wide variety of standard quantum chemical methods ranging from semiempirical methods to DFT to single- and multireference correlated ab initio methods. It can also treat environmental and relativistic effects.

ORCA uses standard Gaussian basis functions and is fully parallelized. Due to the user-friendly style, ORCA is considered to be a helpful tool not only for computational chemists but also for chemists, physicists, and biologists that are interested in developing the full information content of their experimental data with help of calculations.

PS: You can find more choices from this Wikipedia link.

MOLCAS is now in it's 5th decade! The first version was written in the 1980s by the group of Bjorn Roos, one of history's giants in quantum chemistry. It can do many of the things most mainstream quantum chemistry packages can do: integrals, Hartree-Fock, DFT, MP2, coupled cluster, geometry optimization, etc., and while it can do "single-reference quantum chemistry" about as well as the other mainstream packages (or in many cases even better, which I'll mention later in this answer!), it has also been very popular in the "multi-reference" community because of its implementations of CASSCF, RASSCF, GASSCF, CASPT2, RASPT2, etc. (in addition to MRCI). The original lead developer of MOLCAS (Bjorn Roos) also happened to be a pioneering force behind the initial development of a lot of those methods in the first place, see the answer here for more information on that: Is there a free package with robust CASSCF functionality?. Additionally, it can do QM/MM (molecular dynamics with quantum effects included) and supports solvent models like COSMO, so it's not only useful for small molecules but also proteins and other macromolecules.

Psi4 is a fully open-source quantum chemistry package that is gaining a lot of interest in my community (computational) combustion chemistry. Here is the manual for the latest release: it has most, if not all, of the theoretical methods (HF, DFT, CC,...) and also lots of interfaces and integrates into C++ and Python (sadly no Fortran).

The bonus on it being open-source is that it eliminates licensing headaches while also making it far easier to interact with the developers (or make our own contributions) and integrate it into other toolchains, e.g. running Psi4 automatically (integration in-progress into ARC) in the context of automatically generating mechanisms (overview).

For many researchers, GAMESS is the "natural" substitute for GAUSSIAN. Developed and maintained by the group of prof. Gordon (also a banned GAUSSIAN user, see image below).

It has versions for Linux (ARM and x86_64 processors), MacOS X, and Windows among others. 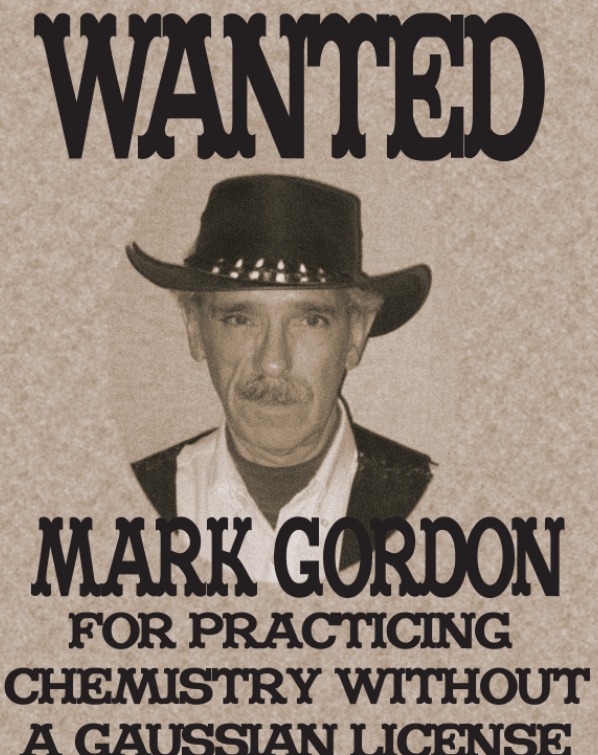 31
Is there a free package with robust CASSCF functionality?
26
Quantum ESPRESSO vs VASP
12
Comparing GAMESS, OpenMOLCAS and Psi4
9
What software can I use for gas adsorption calculations?
7
Non-constant Vacuum potential

22
Since MKL is not optimized for AMD hardware, should I use a math library specific to AMD, or would an open-source one be just as good?
14
What is the precise location of the grid points/voxels in a Gaussian .cube file?
8
How do the various programs read or write integrals in FCIDUMP format?
10
Codes for post-processing Gaussian cube files?
9
A good software for DFT optimization and nonlinear optical properties
11
What units are used in Gaussian 16 for dipole derivatives output?
9
Why is the planewave codes ecosystem healthier on free/opensource software adoption, when compared to codes supporting atom-centered orbitals?