What is the meaning of element-rich environment in calculating formation energy?

I want to use the formation energy formula used by the article in the picture below. The authors have used the term S or Sn-rich environment. What is the meaning of this? How it is related to the calculation of formation energy? 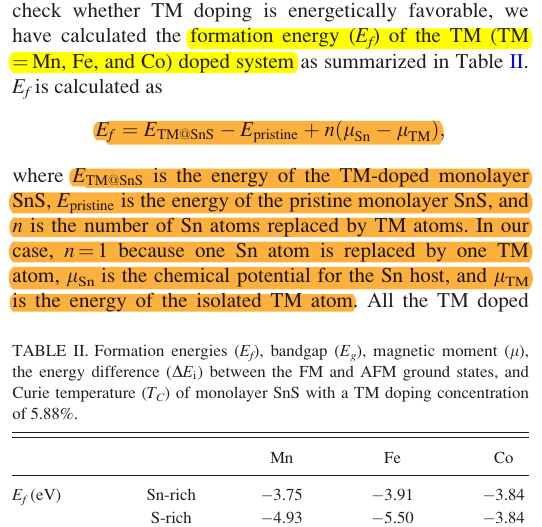 How rich the environment is in $\ce{Sn}$ vs $\ce{S}$ affects the chemical potential $\mu_\ce{Sn}$ as described in Section IIIA of the linked paper:

(Note $E_\ce{SnS}$ and $E_\ce{S}$ in the quote above are the energy per formula unit and atom respectively). As your image shows, the formation energy depends on $\mu_\ce{Sn}$, so it also depends on how rich the environment is in $\ce{Sn}$ vs $\ce{S}$.

Richness here is just referring to how abundant a given element is in the surroundings. This won't change the simulations of the monolayer, but it does affect the formation energy. This is because in an Sn-rich environment, you are not just producing a lone Sn atom when you remove it from SnS. Rather, you are implicitly incorporating it into bulk metallic Sn, which has different energetics. For an S-rich environment, they assume the Sn is instead producing a site of SnS at the expense of a site from bulk S. So depending on the environment, the overall formation process is different.

If you aren't concerned about the environment effects, you could use the same definition for the chemical potential as was used for the doping transition metal (e.g. the energy of one isolated atom). They actually do this earlier in the linked paper, where they compute vacancy formation energies for SnS either using the environment affected chemical potentials or just the energy of a lone atom.

Not the answer you're looking for? Browse other questions tagged density-functional-theory or ask your own question.

11
How to generate relativistic pseudo-potential using Vanderbilt USPP that captures spin-orbit coupling?
10
Which method gives the most accurate electron density, and how can it be verified experimentally?
8
Spin polarized DFT calculation in Quantum ESPRESSO
8
What are the pitfalls for the simulation of MOF materials with VASP?
5
How to calculate the enthalpy of formation?
7
How to calculate E_TM in the formation energy formulas?
5
What is the meaning of these d states names?