What do we mean by spin-splitting energy?

What is the meaning of spin-splitting energy as described here?

I see now how your initial questions were related, as they all fall under the scope of crystal field theory. I wrote a bit about this in a previous answer.

At least in the context of molecular crystal field theory, you will usually see the phrase pairing energy rather than "spin-splitting". The distinction is basically just the direction, where the pairing energy is the penalty for having electrons share the same spatial orbital and the spin-splitting energy would be the increased stability from separating a pair.

The word "splitting" seems to occur only in one sentence, over the course of the entire paper that you referenced:

I can see why you had to ask this question here, because when I search "d-orbital spin-splitting" in quotes (so that we're searching for that exact phrase), only two results come up: this paper and this paper (the same happens if I replace either of the hyphens with spaces.

The phrase "d-orbital splitting" doesn't show up much either, but at least it shows up here where the splitting discussed is $\Delta_0$ which is actually the crystal field splitting energy. 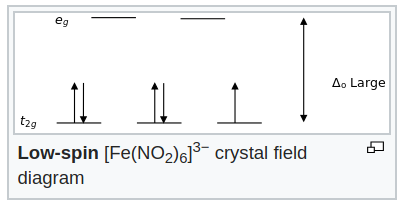 My reading of the relevant paragraph suggests to me that the authors made this conclusion about the "d-orbital spin-splitting" being larger than the crystal field splitting of $\Delta_0$ based on Table II, rather than any of the DOS figures. So perhaps the readers are not expected to deduce this by looking at the DOS plots as you ask how to do, but it could be possible, and that's why this nice Q/A system allows us to get answers from multiple people 😊.

14
Spin State of Transition Metal complex
10
How to understand the crystal field splitting of d-orbitals in a trigonal prismatic geometry?
10
Spin orbit coupling from spin polarized density of states?
13
How many spin states do Cu+ and Cu2+ have and why?
10
Spin considerations for the bandgap and optical excitations
8
Why can't we change the spin angular momentum of electrons with an external optical field?
4
How to interpret spin density isosurface figures?
11
Can crystal field splitting energy or spin-splitting energy be detected in a density-of-states plot? How?
10
What is the difference between a half metal (HM) and a spin gapless semiconductor (SGS)?