How may I create a CIF for a core-shell nanostructure? Is it possible in VESTA, or elsewhere?

All the tutorials I see online for creating a molecular model are either for small molecules or for crystal systems. I can't seem to figure out how to create a model for a core-shell nanoparticle. Is this doable in VESTA? Or do I have to use something else? Can someone give me directions on how I could learn this?

Well, to answer properly this question first we would need a clarification about the nature of the CIF file. This type of file is Crystallographic Information File, which means that it is devoted to periodic, crystalline, and symmetric materials. In my opinion a core-shell nanostructure (CNS) is not fullfilling this requirements. In particular, the symmetry and periodicity of a crystalline solid is necessarily different from the discrete nature of such nanostructure.

Remember that, contrary to a molecular crystal in which you can extract the geometrical structure of a single entitie, it is not possible to do so in a CSN.

If you want to obtain a XYZ file with the positions of the atoms, that is a different point and , as far as I know, it should be handmade.

Two things are mixed in the question.

How to create atomistic model of a core-shell nanoparticle?

Are both the core and the shell assumed to be crystalline?
Most likely you will need is to write a small program that generates the required configuration by calculating atomic positions.

You can create the first approximation of a (uniform) nanoparticle by cutting out a desired shape from a crystal. Sphere is easy to calculate. But it's known that some crystal surfaces have lower energy than others (Wulff construction), so polyhedron can be more realistic. You can also cut out a shell, but I imagine the structure of the core-shell interface will be non-trivial.

A decade ago I was part of a group that used "core-shell" models, but both core and shell were from the same material, the structure just varied slightly. So that was easier. I used a Python script documented here:
https://github.com/wojdyr/gosam/wiki#graingenpy
to generate initial models. The script was modified every time we tried some new idea. 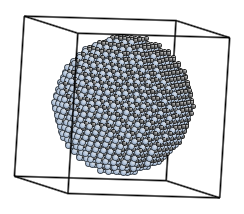 How to put atomistic model into a CIF file?

Do you mean a CIF as it is used in small-molecule crystallography (SMX)?

In general, CIF format is like JSON or XML, it can store anything. But in practice it is used only for a few things, so usually it's clear from the context what is meant by CIF. In SMX it's description of a model plus information about experiment and refinement. In MX (M=macromolecular) it's either refinement restraints or a model (mmCIF). Or structure factors. I see that here it must be about coordinates, but we still have two options:

Anyway, converting between file formats is the easiest part.

31
What are the freely available crystal-structure visualization softwares?

18
How can I create a .CIF file from x-ray diffraction data in a paper, for compound not found in crystallographic database
12
How do I extract a molecular structure from a CIF file?
13
Extracting molecular structure from CIF file using VESTA or Mercury
7
Calculate number of electrons per shell for an atom
6
How can I make a CIF file for Monoclinic MoO2?
5
1T and 1H CIF file for MoS2
6
How to work with unit cells in Vesta
3
How to export .xyz files from VESTA of crystal viewed along different crystallographic axes