What does B3LYP do well? What does it do badly?

I have seen a general criticism of B3LYP in computational chemistry (especially with the 6-31G* basis set). I would like to know some of the more/less obvious problems that occur when using it and what alternatives exist for that level of theory. I am aware that it does not include vDW interactions, so I would like to avoid discussion of that unless comparing to another functional which includes it.

I am looking mainly for answers in the organic/inorganic space as this is where it is used for better or worse, but would be happy to also hear about surface catalysis for this functional.

I think this review¹ by Head-Gordon is a useful supplement to Nike's answer. Its combines a review of functional development, a benchmarking of various functionals, and an explanation of the design process for the $\omega$B97 functionals. Its also open access, so its a great resource if you are interested in DFT functionals in general.

They benchmarked 200 DFT functionals on a variety of different tests focused on isomerization energies (I), barrier heights (BH), thermochemistry (TC), nonconvalent dimers/clusters (NCD/NCC), and equilibrium bond energies/lengths (EBE/EBL). The datasets were also classified with a suffix indicating whether they are easy (E) or difficult (D) examples. 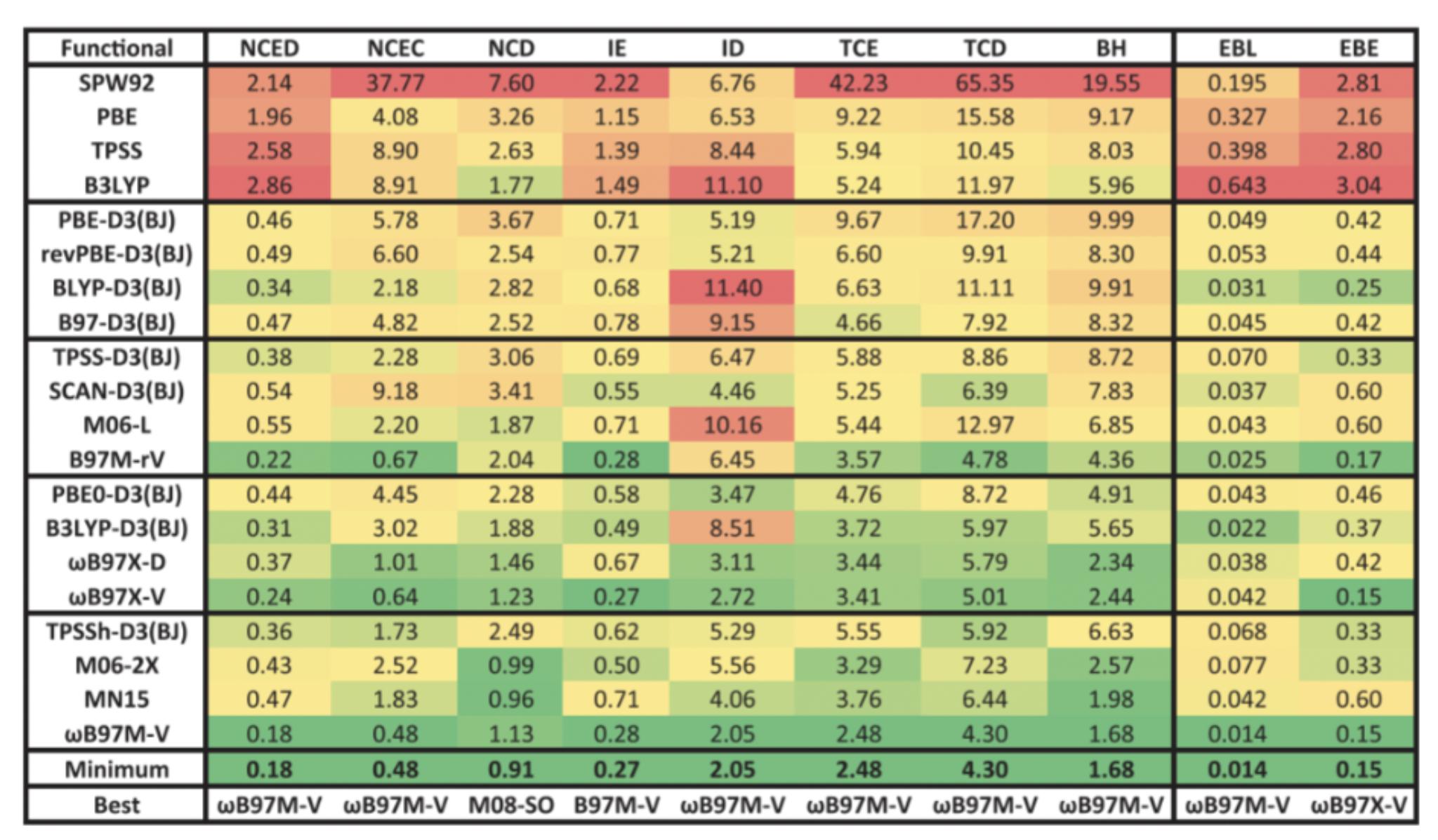 Note the coloring of each cell gives a rough sense of how the functional compares among all 200 functionals tested, rather than just those in the table. The full list of functionals, along with the ranking/RMSD of each functional on each dataset is given in the paper. Even among the whole set, where many of the other functionals also don't explicitly account for dispersion, B3LYP tends to be in the bottom quartile for most of the datasets.

What you can see is that B3LYP does fairly poorly, notably for isomerization energies and equilibrium bond length/energy. So B3LYP on its own generally doesn't do great across a wide variety of problems. However, if one is able to include dispersion corrections, in this case D3(BJ), B3LYP's performance is much improved, becoming basically on par with $\omega$B97X-D. The only notable exception is isomerization energies where it still seems to struggle.

I should also note that all the calculations were done with the def2-QZVPPD basis set and a (99,590) DFT integration grid (99 radial shells with 590 points per shell). The use of a large basis and accurate grid should make the comparison as much as possible about relative capabilities of the functionals, rather than basis set completeness. On the flip side, as has been mentioned in other answers, if you are working with certain smaller basis sets, you may obtain more favorable results than expected due to error cancellation.

B3LYP is still a decent functional at its level of theory (single-hybrid functional), but you're right that there's a general criticism of it, which I largely hear in the form of people saying things like "all they did was B3LYP/6-31G*" to criticize non-experts that blindly use this combination which became the "default" in chemistry for non-expert groups for many years.

As Susi Lehtola said here, BLYP/6-31G* performed better than wavefunction-based methods for equilibrium geometries, dipole moments, harmonic vibrational frequencies and atomization energies in this 1993 paper. A co-author of that paper (John Pople) was the original author of Gaussian70 and would soon get the Nobel Prize, so it was a widely seen paper, and then a year later Mike Frisch (currently President of Gaussian) did a comparison of BLYP to B3LYP and LSDA again with 6-31G* (and one more basis set), which led to the B3LYP/6-31G* combination becoming widely adopted.

But wavefunction-based methods have improved

In the above paragraph "wavefunction-based methods" referred only to MP2 and QCISD (it was 1993 after all) and if they could compare to CCSD(T) which became in the 2000s known as the "gold standard of quantum chemistry" for about a decade, they wouldn't have found found BLYP/6-31G* or B3LYP/6-31G* to perform better. Much of what people use B3LYP/6-31G* for can be done very fast with CCSD(T)/cc-pVTZ in 2021 if people just knew that, so many people find it cringeworthy when B3LYP/6-31G is still used.*

One should consider more than one functional

TAR86 pointed out here, that it's important to evaluate more than one functional for the set of molecules you're dealing with, or to look at benchmark studies which have already done this, and most of the time when you see people using B3LYP/6-31* they are using it with no justification apart from it being all they know. This means that people can again be getting worse results than what they could have got with the same cost, simply because they didn't do a bit more research.

Functionals have also improved (answering the call for "alternatives")

As the OP (Tristan Maxson) said here, B3LYP/6-31G* is old and there's now better options. As mentioned by me here, a comparison of 47 functionals (2 LDA, 14 GGA, 3 meta-GGA, 23 Hybrid, 5 Double Hybrid) in an enormous dataset was done by Goerigk and Grimme. You can see in the figure below that B3LYP is still a very decent functional, standing in the "middle" of the pack of other functionals at the same level of theory (single-hybrid), having an overall average error against CCSD(T)/experiment of slightly less than 4 kcal/mol while other single-hybrids can have average errors of a bit more than 2 kcal/mol in the best case and almost 5 kcal/mol in the worse case. But you can indeed see several other functionals at the same level of theory of B3LYP: 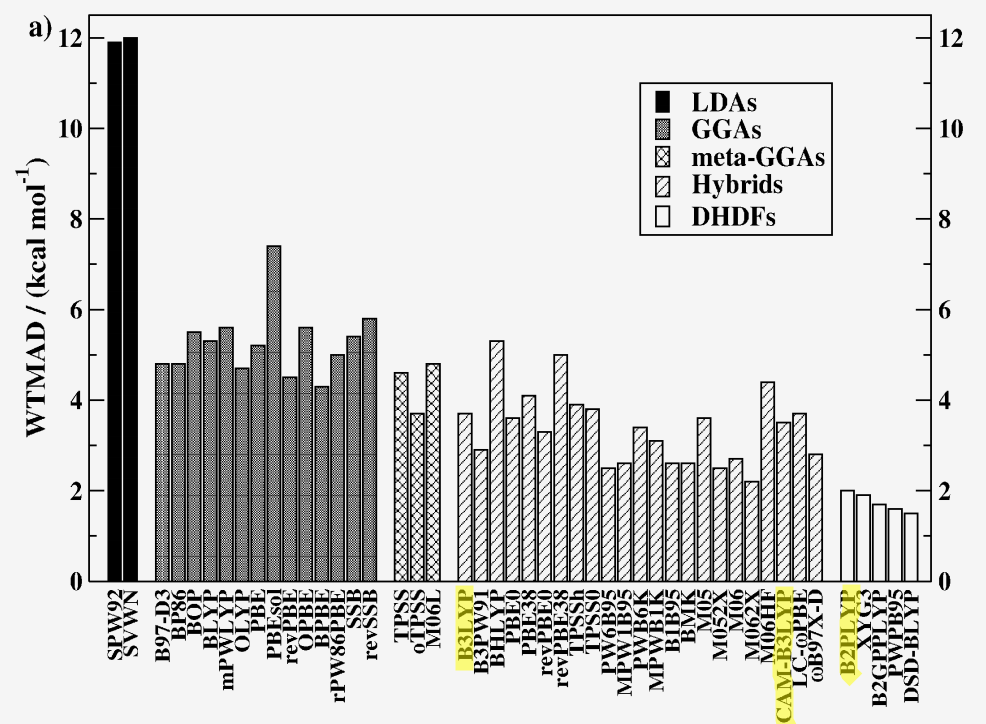 So even if we want to blindly use just one functional as a black-box (without comparing against other functionals or looking for a benchmark study on the class of molecules we're dealing with), things like M06 and PW6B95 seem to work better better on average than B3LYP overall on a comprehensive dataset like the one used in the study above. They didn't use 6-31G* because some of the elements included in the dataset don't have 6-31G* sets available, but they did say that (aug-)def2-SV(P), which they did use, is usually comparable to 6-31G*.

The last section above answered your call for "alternatives at the same level of theory" so now I'd like to answer your call for:

The figure below, also from the same paper as the above figure, shows that B3LYP is: 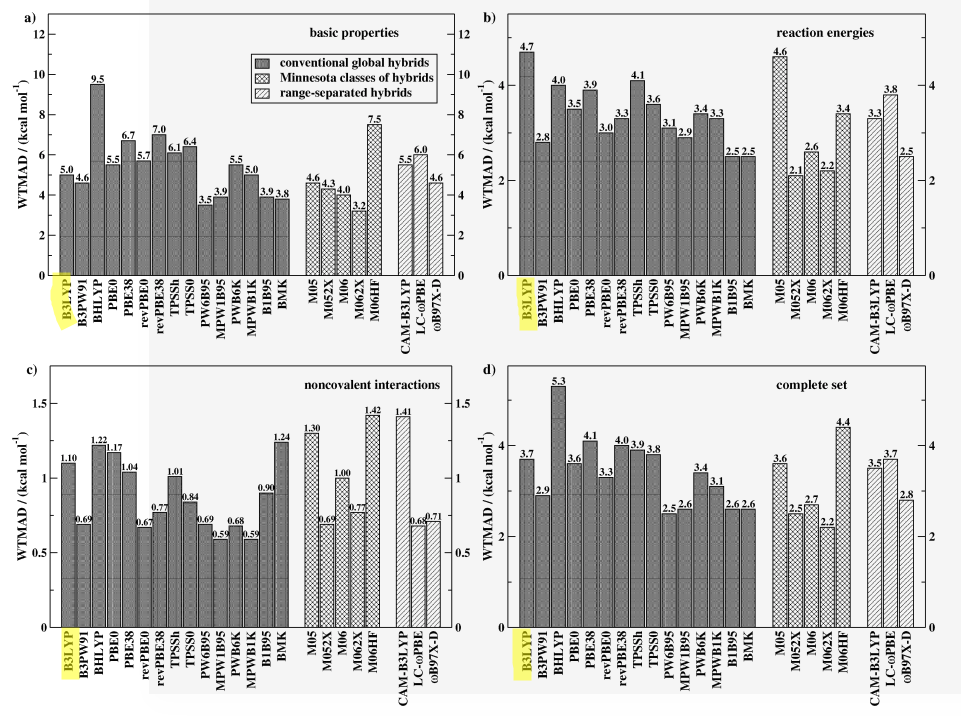 So reaction energies would be one of the places to be careful about using B3LYP, in addition to RESP (Restrained Electrostatic Potential) calculations as noted in B. Kelly's warning that it will cause partial charges to be added implicitly (there's a lot more details in the original answer though), and for other things such as in Andrew Rosen's comment which I would be thrilled to see turned into an answer if time permits.

I don't have too much to add to the answers of Nike Dattani and Tyberius, but I think the crux is that its capabilities have been historically overestimated.

One particular failing of B3LYP is that it tends to underestimate bond energies. However, since the small (and fast) 6-31G* basis set will lead to overbinding, the famous combination B3LYP/6-31G* ended up being good "by accident." At least for small molecules, because it turns out that the performance of especially the LYP correlation part worsens in larger systems. Maybe not too surprising, since LYP is designed to reproduce correlation energy of the He atom.

The general issue, then, is that even if B3LYP/6-31G* may work because of error cancellation, this is not a reliable assumption in general. After all, you want to be right for right reasons!

You also ask about surface catalysis. The main issue of B3LYP in such systems, is that it is hybrid functional, which are extremely expensive to use in periodic systems. You will almost always see people use GGA or meta-GGA functionals in such systems, some of which are actually very good for such problems (but this depends strongly on the system!).

3
Why is there a deviation between the experimentally calculated values and theoretical done by DFT calculation?
43
What are some recent developments in density functional theory?
22
What are the pitfalls for new users of DFT?
11
What does "level of theory" mean?
15
What are the parameters that need to be calculated to design the structure of a molecule?
10
Which DFT functional should I use to simulate spectra of pesticides?
11
DFT functionals from MP2 methods

49
What is the closest thing we have to "the" universal density functional?
25
What are the best functionals for transition metal compounds?
14
What is the role of a chemist in computational chemistry?
16
How well can we model chemical synthesis?
7
What does "Test job not archived" mean?
8
What does it mean when the first order correction energy is 0?
7
Analytic gradient and hessian for B3LYP
13
What does machine learning learn about DFT?