Are dispersion correction methods for DFT (such as D3) useful for geometry optimization?

For what I know the DFT-D3 method or similar corrections that take into account dispersion effect, add this type of contribution through calculation of atom pairwise interactions at the end of an energy calculation by simple addition. I would like to know if I'm right, because in this case I think it cannot affect the final geometry in a geometry optimization. I'm asking this question because usually all these methods are benchmarked only for energy calculation and never for geometry optimization. I hope to have explained well my answer.

Yes, vdW interaction affects energies but, also, geometries. This effect is the most pronounced if a DFT method predicts an interaction in a dimer to be repulsive: a geometry optimization will then simply dissociate the dimer. Normally, any vdW correction term does not only contribute energies, but als gradients, which in turn affect geometry optimizations (or MD simulations). Although I gather from other answers that some codes do not implement gradients, which I didn't know.

Proper benchmarking is hard for structures, because gas phase, zero Kelvin geometries (the thing you calculate) are hard to come by experimentally for somewhat larger molecules—unfortunately exactly the kind of systems where you would expect vdW interactions to be imporant. Nevertheless, certain benchmark sets have been proposed, one of them based on rotational constants (which can be measured, and also calculated from an optimized structure). Here's an example of such a benchmark calculation, from Grimme & Steinmetz, Phys. Chem. Chem. Phys., 2013, 15, 16031-16042. You can see that dispersion corrections tend to make molecules "smaller" or more compact: 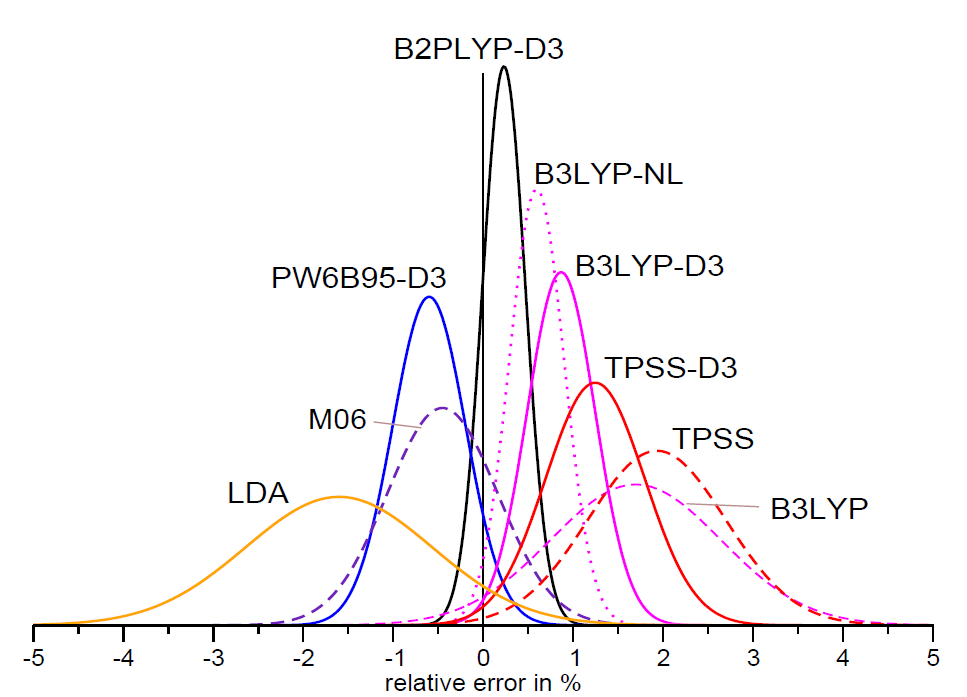 Updated versions of these test sets have also been published, and are being used more routinely. Grimme likes to use these a lot for testing his "low cost" methods, which are intended for rapid geometry optimizations in large systems. One recent example is the testing of r2SCAN-3c.

Also, if you consider molecular crystals to be "big molecules," you can see that proper vdW treatment is important to get correct lattice constants, for example for ice.

In some special case, like the system in which two rare gas atoms interacts with each other, the potential energy curve given by functional like B3LYP has no minimum, which is quantitatively wrong. However, if a dispersion correction is used, an acceptable energy minimum can be calculated and the geometry optimization can be done.

You may get the same result in some cases but those are special cases, in general dispersion correction does have an effect on the optimization. The effects are often very noticeable if you have large molecules or two or more monomers that are calculated together. In such cases dispersion correction can have a large effect on the optimized geometry and can be essential to get good results.

Energy is simply the most common metric for benchmarks and it is easier to compare a single number than a whole geometry. However, I am not a specialist in benchmarking, so there could be other reasons for the prevalent use of energy. But the prevalence of energy as metric in benchmarks certainly does not mean that dispersion correction has no effect on geometry.

Additive dispersion correction methods such as D3, D3(BJ), D3(BJ)+ATM, TS, MBD@rsSCS, etc. are good for geometry optimizations. These methods find the London dispersion interactions governed interlayer distance lower than the mean relative error of 2%. On the other hand, it's a good idea to avoid using these methods for energy calculations. For example, these methods overestimate the interlayer binding and exfoliation energies of 2D materials between MRE 20% and 80%

There are just a few methods available for both reliable geometry and energy calculations. High-level ACFDT-RPA (Computationally very expensive), SCAN-rVV10, and PBE-rVV10.

tldr; Use dispersion correction for optimization

I asked a very similar question a few years ago. Many indications for dispersion corrections in density functional methods are for intermolecular interactions. Clearly these corrections are important in such intermolecular or long-range interactions (e.g., inter-layer spacing in a material.. far from the bonding regime).

For example, the mean $R^2$ correlation between B3LYP and DLPNO-CCSD(T) energies was 0.706 without dispersion and 0.920 with -D3BJ dispersion correction. Similar effects were seen with other functionals.

Not the answer you're looking for? Browse other questions tagged density-functional-theory geometry-optimization dispersion-correction or ask your own question.