I would like to run some benchmark of different DFT functionals. The most time consuming part is obviously the generation of the input files. I'm not a programmer, but I think this could be done by writing a generic input file with geometry and parameters except for the dft functional, then another text file with a list of the functionals one wants to test. Then I think a script could generate every single input file, maybe appending to it the name of the functional. Hope you have some scripts to share or other ideas to solve my problem.

density-functional-theory programming
Share
Improve this question
asked May 23, 2021 at 19:36

Consider the MOLPRO input file below template.inp, obtained from here, which was used for a previous MMSE answer about the energy of a zinc atom, except now we're using DFT and I have just entered the word functional instead of the actual functional being used:

If you run the following commands in the folder containing template.inp and batch_script.x (the first is to make the script file executable, and the second is to run the script):

your folder will contain the following three input files:

which look exactly like the template input file shown in the beginning of this answer, but with functional replaced by B3LYP, PBE and HSE06 respectively.

Explanation of the commands in the script file:

I've made the above files available on GitHub: They are here in the folder called sed. You'll find template.inp, batch_script.x and the three output files that get produced when you run the .x script. There's also a folder called MATLAB containing the skeleton of an alternative solution I wrote.

This is an alternative approach with Python scripting. For bash scripting, @NikeDattani has already posted an excellent answer.

Let's say you are trying to run the input files with GAMESS. Start with a template file that may look like this:

Now save the template file as template.inp.

This Python script will read the template file and replace "B3LYP" with names of other functionals and write new input files with the name of the functional appended.

Note that you can also choose to run the input files inside the same script. There are some lines for that at the bottom. The command_string has to be changed depending on your QM software and OS. The QM software is invoked with os.system() of python which calls the command line terminal of that OS (shell for Linux, cmd for Windows). The os.system() pauses the Python script execution until the terminal returns.

So, if the QM program or command you are running doesn't return until the calculation finishes then the script will run the files sequentially, as the os.system() is inside the for loop. However, if you are running a job submit script in an HPC or something similar to that, then the program will not pause to allow the calculation to finish, it will submit all the jobs in quick succession. Another issue with os.system() is that you would have to escape backslashes for path names if you are using it on Windows (because it is based on C system() IIRC). A better option might then be to use os.subprocess.run().

The advantages of using Python is that it is OS-agnostic (for the most part), so it can be run on all systems. (Bash is not natively available on Windows). Another benefit is that Python is more flexible than bash, so if you need some further modification to the input files, you can do that easily. The disadvantage is obviously that you have to have Python installed.

The python script, template file and sample input and output files can be found here: https://github.com/ShoubhikRaj/molecular-modelling/tree/main/matter-modelling/dft-benchmark

To take @Shoubhik's suggestion of Python one step further, you could also consider setting up your benchmark using Snakemake, a Python program/extension designed for building rule-based data analysis workflows. An example of this approach is the ACCDB (A Collection of Chemistry DataBases) project$^{1,2}$, which in addition to collecting geometries from a number of databases provides a simple interface to rerun these calculations with different basis sets or functionals.

The disadvantage of this approach is the need to learn how to implement a snakemake procedure, which relies on knowing some Python plus additional Snakemake specific syntax. The advantage is that it provides a convenient way to quickly extend your benchmark set to include new molecules/functionals/basis sets/etc. It also can be used to control the job submission and data collection processes, entirely automating the creation of the benchmark data. 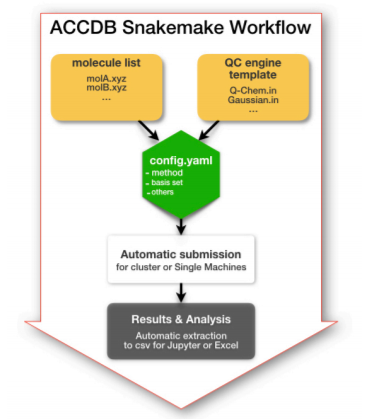 From personal experience, with a decent Python background, it wasn't terribly difficult to make my own snakemake routine.

Not the answer you're looking for? Browse other questions tagged density-functional-theory programming or ask your own question.

9
Which software is good with generally contracted basis sets?

12
Physically motivated double hybrid DFT?
8
How to generate a pseudopotential for a cation/anion?
10
How to generate KPOINTS file for HSE06 band-structure calculations?
7
Input constraints while comparing different DFT calculated properties for the same material but different atomic arrangement
11
Create doped structures to POSCAR files for vasp
8
What are the input parameters of VASP for 2D material geometry optimization?
7
VASP input file for formation energy calculation
8
Benchmark test cases for DFT program or VASP?