What exactly is a topological insulator and how to recognize one from band structure?

Four years ago, the Nobel Prize in physics was awarded for "for theoretical discoveries of topological phase transitions and topological phases of matter." In line with this, I heard of topological insulators, a new material with the strange property of having an insulating bulk with a conductor surface, having a great interest because they could be useful for many future applications in electronics and quantum computation.

I would like to know what is a topological insulator from a theoretical point of view, i.e., how to recognize one from its band structure and how is the property of bulk-insulator/surface-conductor explained from first principles (at least conceptually).

condensed-matter topological-insulators
Share
Improve this question
asked May 11 '20 at 17:24

There's an example on Wikipedia: 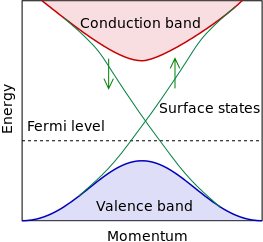 An idealized band structure for a topological insulator. The Fermi level falls within the bulk band gap which is traversed by topologically-protected spin-textured Dirac surface states. By A13ean

As far as whether those surface states will appear in a experimental measurement of the band structure, I am not sure.

Not the answer you're looking for? Browse other questions tagged condensed-matter topological-insulators or ask your own question.

15
What are good resources to study crystallographic defects in different dimensional systems and their topological dimensionality?
27
What is band inversion and how to recognize it in band structure?
10
How to model Topological Insulators from first-principles?