Classes of Graphs used in Chemistry

I am looking for common categories of graphs used in chemistry, for math research I am doing in graph theory.

When I write categories, the meaning is not for graphs design or types of design, but for categories of nature-originated large graphs (like large molecules), that can be mathematically described. For example, trees, unicyclic graphs, bipartite graphs, etc.

I mention it because I saw a similar question on the Biology Stack Exhange, and the response there is not the meaning of the asker at all.

I tried to look for scientific articles that review it but did not find any related survey.

Hückel method can be related to Graph theory

Graph theory is not part of the average Chemistry undergraduate curriculum, so I have just cursory knowledge about it. But from what I read about, it shows everywhere in Chemistry. Regarding Matter Modeling, Hückel molecular orbital theory is one of the early wins of quantitative theoretical chemistry, developed by Erich Hückel in the 1930s, to explain systems containing conjugated double bonds that show up a lot in organic chemistry. For a bit of history on it, see (1). Benzene is the poster child of these systems.

Hückel proposed the energy levels in these systems can be obtained by solving a secular determinant with this form:

Where $H_{ij}$ and $S_{ij}$ are known as the overlap and Hamiltonian matrices. To solve it, he adopted the following approximations:

Taking the example of benzene, we obtain this:

Then we can use a computer algebra system (CAS) like SymPy to solve this secular determinant:

Getting the following result:

Filling the pi electrons contributed by each of the six carbons according to the Aufbau principle, we get: 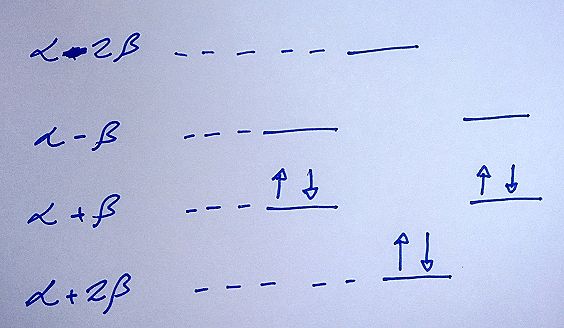 That explains the stability of benzene, as every pi electron ends in a orbital at a energy level bellow the reference energy $\alpha$ (note $\beta$ is a negative number), and they're all paired up, thus avoiding a reactive radical form with unpaired electrons. So we find benzene and benzene-like molecules everywhere in organic chemistry. The nucleobases in DNA, for example, have benzene-like rings in their structures.

As explained in (2), the Huckel secular determinant can be related to the adjacency matrix of the molecular graph:

From this theorem it follows that the Hückel molecular orbitals coincide with the eigenvectors zj of eigenvalues λj, j=1,2,...,n, of the adjacency matrix of the Hückel graph. The eigenvalues λj of the matrix A and the energies Ej of the corresponding electrons are related simply as

Not the answer you're looking for? Browse other questions tagged one-topic-per-answer molecular-modeling mathematical-modeling or ask your own question.

17
What are the applications of chemical graph theory?

26
Where is the extended Hückel method (EHM) still used today?
15
What are the modelling techniques that can be used for simulating microstructure evolution in materials?
22
What functions other than Gaussians are used for orbital basis sets?
7
Which non-commercial software can be used to dock two proteins?
19
How is group theory used to deduce which of these integrals are equal to 0?
9
Which non-commercial softwares can be used to model amorphous carbon?
8
Are there other custom chemistry programming languages besides SVL?
12
What software can be used to do QTAIM analysis?
13
How are structure descriptors used in regression or machine learning?