How can scanning tunneling microscopy images (constant current and dI/dV conductivity) be simulated? What's under the hood in software packages?

Scanning tunneling microscopy comes in several flavors; vanilla (traditional STM) is constant current where the tip height is varied to maintain a constant current at a set constant bias1 and the signal controlling the tip height is reported, and neapolitan is Scanning tunneling spectroscopy or dI/dV which can be implemented in various ways but usually uses a high frequency AC component to the bias above the frequency response of the feedback loop to "dither" and sense the differential conductivity at some average bias.

This answer to Quantifying electronic overlap? briefly mentions in passing quantum ESPRESSO and CP2K in the context of STM, and this answer to About the surface Greens function method for calculating the surface state briefly mentions in passing the open-source package WannierTools in the context of STM as well, but as far as I can tell this issue hasn't really been addressed in this site yet.

To answer your first question: the theory has certainly been worked out in some detail.

The most accurate approach (a) would involve a quantum transport calculation in the non-equilibrium Green function formalism, describing the tip (L) and the sample (R) as semi-infinite leads, connected by a central region (C), and using the Meir-Wingreen formula to compute the I-V curve. There are codes like Gollum that can do this (I haven't tried it myself).

Experimentally, however, the exact shape of the tip is often unknown (and also not the focus of interest of STM: you typically want to study the sample rather than the tip). In the Tersoff-Hamann approximation (c), the tip is replaced by a single s-orbital and constant density of states (extensions exist for p-orbitals as found in CO-tips etc.). This makes the tip wave function analytic and enables straightforward simulation of STM images directly from the electronic states of the sample.

While there are cases where the Tersoff-Hamann approximation will fail, its simplicity (both in terms of interpretation and computational complexity) often makes it the method of choice in practice; going to higher levels of theory only when required.

For references and more details, including the formulae + numerical aspects like extrapolation of wave functions, see section 2.5 of my Ph.D. thesis. 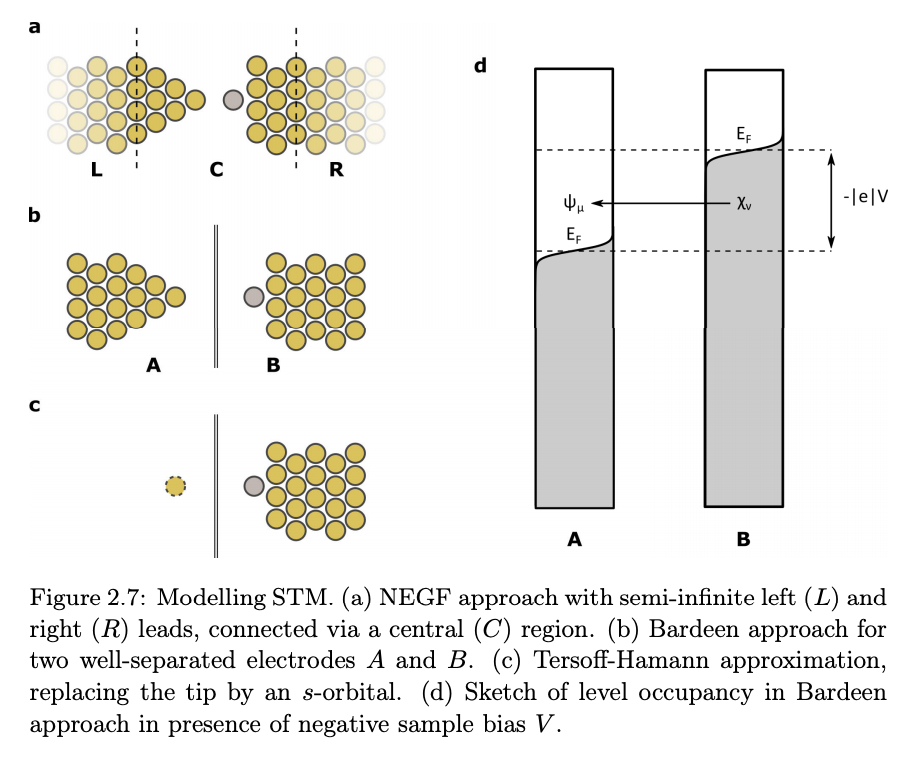 Not the answer you're looking for? Browse other questions tagged reference-request surfaces density-of-states scanning-probe-techniques or ask your own question.

17
What is the difference between BDFT and CDFT (magnetic-field DFT and current DFT)?
9
Can Machine Learning lead to the more accurate theories and methods for matter modeling?
9
How can we calculate the Gibbs free energy from first principles?