I had a question about Haldane's wormhole interpretation (picture below). I believe he first proposed it in his paper Berry Curvature on the Fermi Surface: Anomalous Hall Effect as a Topological Fermi-Liquid Property. To my understanding, this is for 3D band structures, where a gapless point initially gives one Dirac string, which then immediately splits to two Dirac points and creates a Berry flux loop.

My question is, let's say we have a 2D model (instead of 3D) - such as gapped graphene or the Haldane model with a K and K' point - with a band touching ONLY at K'. Am I correct in saying that:

Or, does this picture fail in 2D? 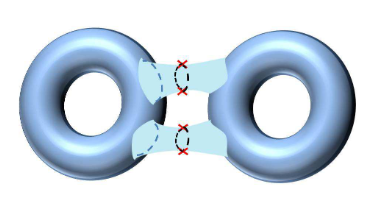 Here are my answers:

Someone please feel free to correct me if anything above is off. Thanks.

Not the answer you're looking for? Browse other questions tagged condensed-matter quantum-mechanics berry-phase or ask your own question.