Ask Question
Asked 1 month ago
Active 1 month ago
Viewed 45 times
4
$\begingroup$
This question was migrated from Chemistry Stack Exchange because it can be answered on Matter Modeling Stack Exchange. Migrated last month.

I'm a computer scientist, helping with a chemistry project in python.

I have been working with the library pysmiles in order to parse SMILES into a molecule graph, and that worked fine until now. Recently, I started changing code so it will work with RDkit as well, since the RDkit library is much larger and has many other useful features.

However, I noticed that RDkit doesn't create a bond for a molecule that has a "zero-order bond", unlike pysmiles which just puts the "zero-order-bond" as a data on that edge.

For technical reasons, I would like RDkit to do the same as pysmiles, and do create a bond, writing in it that it is a "zero-order bond".

As an example, the following molecule was generated by RDkit: 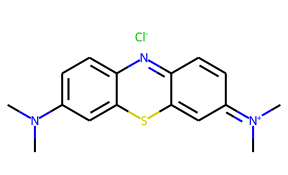 I want the $\ce{Cl-}$ to have an edge to the $\ce{N}$, that will have the data written on it that it is a zero order bond (any other node besides $\ce{N}$ would work as well, for as long as the process of choosing that node is deterministic and depends only on the molecule).

How can I do this? I didn't manage to find an answer in their documentation. Thanks!

As a side note, any technical way of making the molecule graph connected (in a way that doesn't depend on the particular SMILES string for a certain molecule) will suffice for me.

Browse other questions tagged python rdkit smiles or ask your own question.