What is a Padé approximant?

I have been looking at using Goedecker-Teter-Hutter (GTH) pseudo-potentials and I came across the abbreviation PADE.

I was wondering what this abbreviation actually stood for and how it is related to LDA?

To complement mykd's already excellent answer, I will just add that the approximant we all learn in school (the Taylor approximant) is nice to teach and easy to help students learn the concept of approximations, but in practice it's one of the worst options in terms of it's accuracy-to-complexity ratio.

The Taylor approximant matches the $n^{\textrm{th}}$ derivative at a single point. It is extremely rare that you would actually care about the 8th derivative (for example) matching at a single point. More likely, you would want the first, second and maybe third derviatives to match at several points (i.e. you want the whole function to be well approximated). But in the example below, even the 7th order Taylor approximant is not enough for the approximant to match the original function at $x=7$: 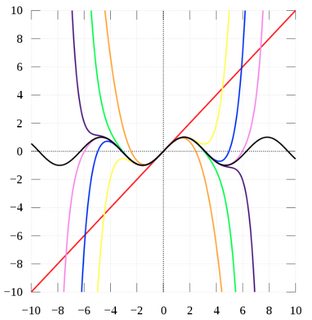 That is very unfortunate since a 7th degree polynomial will shoot off to $\pm \infty$ extremely rapidly (as high-order polynomials always do), so even if such an approximant was excellent at describing the original function in some small region, it would extrapolate horrendously.

Furthermore, imagine trying to approximate a very simple function like $1/x$ with a (Taylor) polynomial near $x=0$. This would be quite impossible, but imagine if instead of trying to come up with the best polynomial approximation, we instead tried to come up with the best rational function approximation. Now we have the flexibility of adjusting the coefficients in two polynomials (the one in the numerator and the one in the denominator) instead of just one of them like in the Taylor series, and the singularities where the denominator of the original function is zero, can now be treated very naturally.

Here are just some of the many different types of approximants which are often superior to the Taylor series, for various practical applications, but are unfortunately not given much attention, even in advanced-level calculus courses:

For discussion about generalizations of Padé approximants to functions of more than one variable, you can see my answer on the topic at MathOverflow.

PADE refers to the mathematician Henri Padé, who developed the Padé approximation, which can approximate a function using rational polynomial functions.

This feature is used to approximate the total correlational functional and Kinetic Energy functional for the Local Density Approximation (LDA) methods.

Not the answer you're looking for? Browse other questions tagged density-functional-theory mathematical-modeling pseudopotentials or ask your own question.

30
Is there any DFT code or software that has the option to use this exact exchange-correlation energy functional?
12
Physically motivated double hybrid DFT?
15
VASP Dielectric constants: What potential to use?
9
Can the fermi level of a semiconductor be below the valence band?
10
Are meta-GGA functionals SCAN (and its variants) ok to use in planewave DFT with the PBE pseudopotentials?
6
Interpreting Critic2 charge analysis in metallic systems
7
For which elements should I include spin orbit coupling in Quantum ESPRESSO?
14
Why are Norm-conserving Pseudopotentials considered so important?
10
How can I calculate the J value in an antiferromagnetic material?
8
Use of higher-order integrators in molecular dynamics?