Why am I getting DOS like this in Quantum ESPRESSO?

I am working on $\ce{GeHfTe}$ and in the case of a non-collinear calculation, I am getting the DOS in the attached photo. I have already relaxed my structure with VC-relax and it is converged with respect to k-points, EOS parameter, and degauss value.

If any one can guide me what is wrong in the DOS obtained it will be very helpful. I am not quite sure about the two sharp peaks around $\pu{-25eV}$. 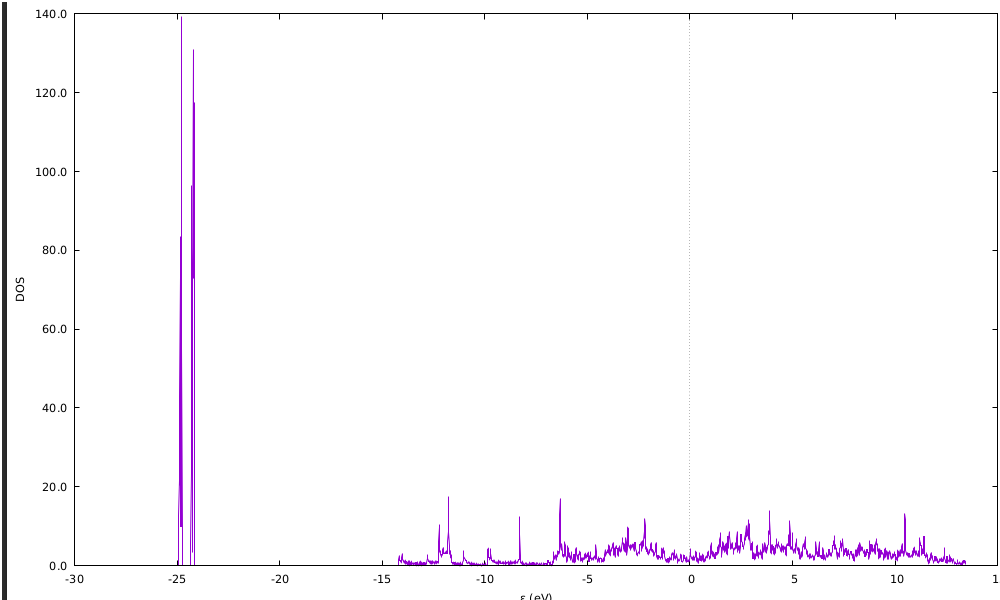 I suspect that these are the $5s$ and $5p$ states of $\ce{Hf}$, which are treated as valence in the pseudopotential you're using. These states will be fairly tightly bound to the nucleus, which always show up as sharp peaks in the DOS.

The reason why tightly-bound states show up like this can be understood by noting that if the potential $V$ is large compared to the kinetic term $T$, then the Hamiltonian $H$ can be approximated as:

Now, recall that k-points are introduced when we apply Bloch's theorem, and write,

where $u_k$ is the Bloch function, which does not explicitly depend on $k$. Substituting into the energy expression, we have

In other words, the phase factor is irrelevant and the dependence on the phase $k$ has disappeared! The energy does not depend on $k$ at all, and the state has the same energy regardless of $k$. This means that the density of states for this state is a delta-function at $E$ -- which is essentially what you're seeing in your DOS plots.

Not the answer you're looking for? Browse other questions tagged density-functional-theory quantum-espresso density-of-states or ask your own question.

12
Why is the Nonequilibrium Green’s function (NEGF) method for quantum transport not implemented in plane wave codes like VASP and Quantum Espresso?
12
Parallelization levels on Quantum ESPRESSO
11
How to model an anti-ferromagnetic crystal in quantum ESPRESSO properly?
12
Getting different total magnetic moment in 'scf' and 'vc-relax' calculations in Quantum ESPRESSO
6
How to make this DOS plot more smooth and add more points around Fermi level?
10
Quantum espresso vs SIESTA
4
What is the source of this band structure and DOS inconsistency?
2
Quantum Espresso calculation for Deuterium