How do I setup my MSTIS simulation correctly?

I'm trying to setup a Multi State Transition Interface Sampling (MSTIS) simulation to study the ligand binding of my enzyme using OPS and GROMACS. My enzyme acts on small sugar chains and I would like to simulate which sugar unit it bound most often (roughly depicted in the picture below). I tried to run a Transition Path Sampling (TPS) simulation, but so far I was not able to obtain a decorrelated path:

According to my understanding so far, TIS might work better here since I think that this transition has a quite small probability. And if I include the other bound states as well, I'm hoping to get a good correlation between the transition frequencies here and those I observe in the lab.

I load these trajectories as described by dwhswenson here. As the collective variables (CVs), I chose the distance of one atom in the corresponding sugar unit to the metal ion in my active center (dist_AAaA & dist_AaAA). 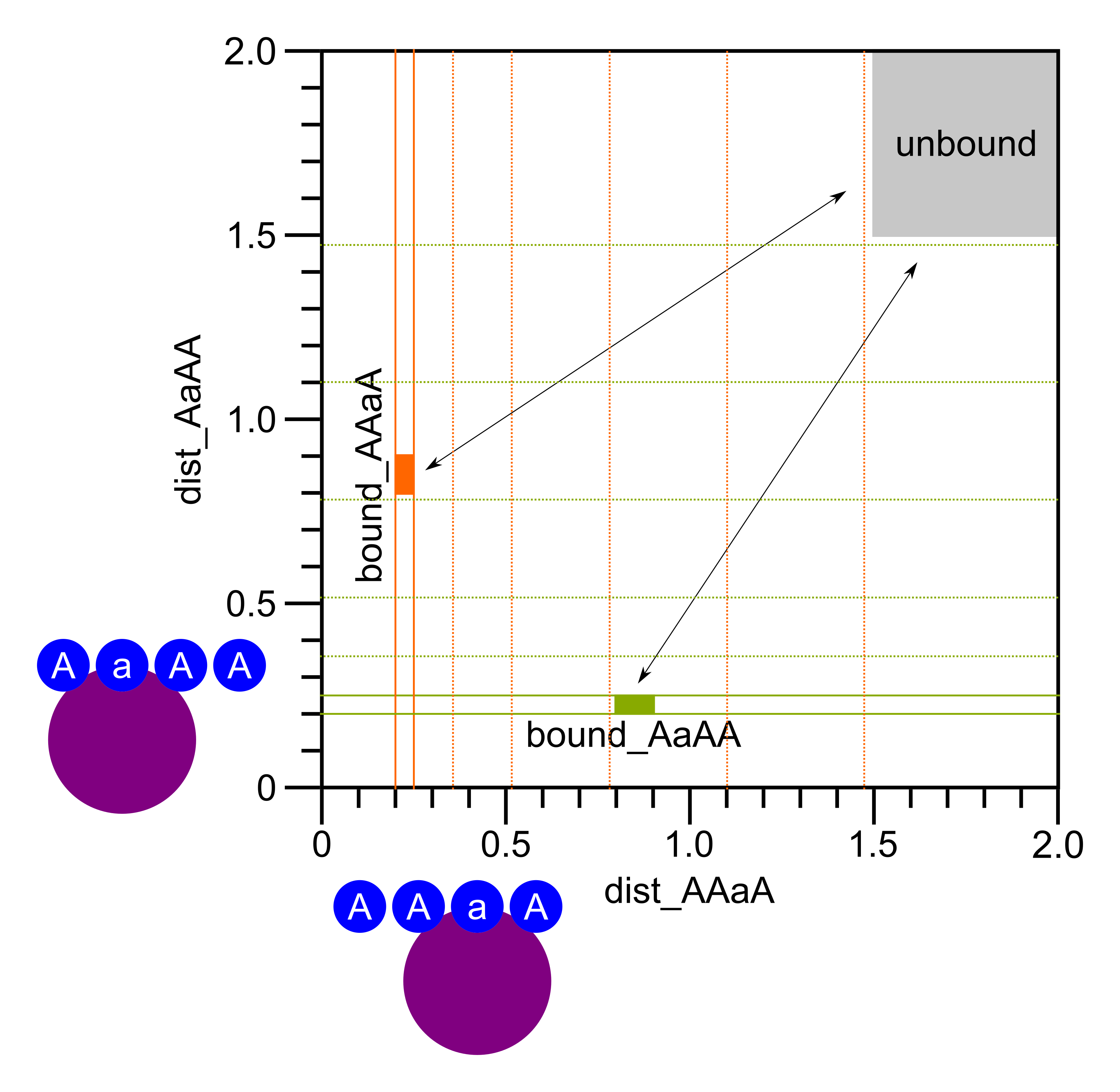 Below a distance of 0.25, I consider the ligand to be bound, while with a distance greater than 1.5 (for both distances), I consider the ligand to be unbound. Since the distance is almost never smaller than 0.2 and the two distances influence each other, the two states (bound_AAaA & bound_AaAA) are quite small in the plot shown above. The dotted lines should indicate the interfaces.

The code runs without any error, but I'm not sure if the setup is correct since my resulting path tree looks like this:

but I don't know how to incorporate that into the interface setup. Preferably I would like to not use an unbound state at all since (at least from my understanding) it's not a stable state and I'm mainly interested in the transition towards to two bound states crossing the outer interface first and finally ending in the stable bound state. But I'm not sure if you could set it up like this. Maybe someone could comment on this.

Furthermore, I'm not sure if the rest of the setup is correct. I did not define an ms_outers for the paths.MSTISNetwork as I'm not sure what this would be in my case or how to correctly define it. Maybe this could be used to remove the unbound state?

I hope to get some help on these main issues, but if you have any comment regarding this setup or a link to a related paper this would be highly appreciated as well.

In general, the choice of standard transition path sampling (TPS) vs. transition interface sampling (TIS) doesn't depend on the physical system you're modeling. Instead, it's about what information you want to calculate about the system. TPS mainly gives you mechanisms. TIS gives you mechanisms and reaction rates. The downside is that TIS is a lot more expensive than TPS, so you only want to use TIS if you need that more detailed information.

What to do when you're not getting decorrelated trajectories

The OP's plot of the path tree is a perfect example of a common issue with getting decorrelated trajectories with one-way shooting TPS. (In two-way shooting, the same problem manifests as shooting moves always getting rejected.)

Let me zoom in on part of the path tree. Under it, I'm going to sketch my guess of what the committor probability looks like as a function of this path. 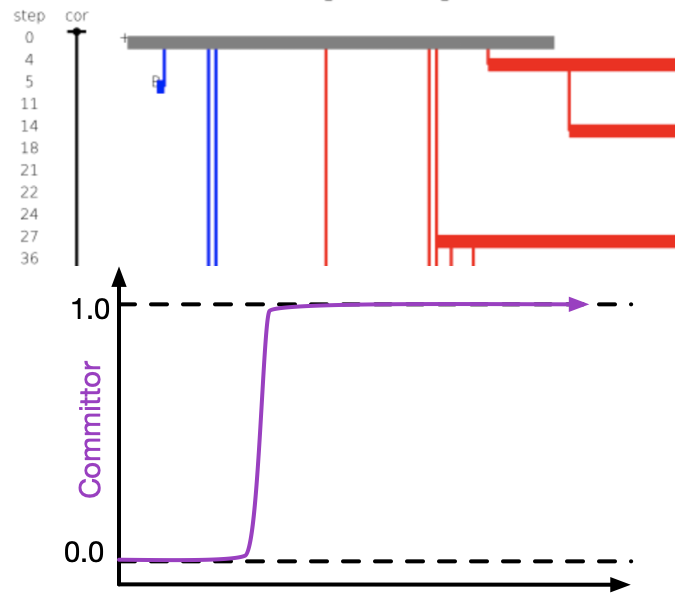 Reminder: the committor is the probability that, from that configuration with random velocities, you end up in the final state before hitting the initial state. A shot in one-way shooting isn't exactly a committor attempt, because the velocities aren't truly randomized, but for condensed phase systems the velocity memory is relatively short, so you can think of each shot as "almost" a committor attempt.

The problem here is every trial from a shooting point left of the committor jump has near-0% probability of accepting a forward shot (you only accept backward shots), and every trial right of the committor jump has a near-0% probability accepting a backward shot. So you end up with this gap between blue (backward) and red (forward), and that gap means no decorrelated trajectories.

Now that we know the problem, the answer (in principle) is easy: select shooting points from closer to the transition state (where the committor is 0.5 and you have equal chance of accepting forward or backward shots). Unfortunately, easy in principle doesn't always mean easy in practice.

Conceptually, a similar analysis was done in Arjun et al., although in that case the different states (two kinds of solids) were only identified after the sampling was done. However, that can give some ideas of how path density analysis can be useful here.

You have two bound states and one unbound state, and you're interested in unbound -> bound transitions. The standard constructor for TPSNetwork takes parameters initial_states and final_states, so you can get the network you want with:

The from_states_all_to_all constructor is literally just a shortcut so that, if the initial states are the same as the final states, you don't have to type the list of states twice.

Not immediately relevant to OP, but for a more complicated set of transitions where you only wanted some transition pairs selected, you could use the from_state_pairs constructor. For example, imagine you have states A, B, C, and D, and you want transitions A->C, B->C A->D, but not B->D. from_states_all_to_all gives all possible 2-state pairs from those 4 states, (except self-transitions, like A->A). The normal constructor TPSNetwork(initial_states=[A, B], final_states=[C, D]) would allow the B->D transitions. But you could get exactly the desired transitions with:

There are a couple of points to make about your MSTIS setup -- first, as I mentioned earlier, unless you want something that you can calculate efficiently with TIS (e.g., rates), there's no reason to do the more expensive setup. Also, I don't think the setup/results here are really doing what you want:

First, your unbound state is a stable state -- it is stable due to entropy. There are a lot of ways for your ligand to be unbound, not so many for it to be bound. And if you just run MD in the unbound state, presumably it takes a long time before you reach the target bound states.

More generally, as discussed above, you probably don't actually want to do TIS here. But a couple points if you did:

7
Import an initial trajectory into OPS without OpenMM

12
Metropolis algorithm reduces energy in molecular simulation, but does not decrease euclidean distance
10
What does vacuum signify in the simulation box after the simulation?
8
Very slow performance for an OPLS-AA methanol simulation
6
How to initiate protein-ligand docking with MD simulation tools
11
How to choose appropriate energy term in GROMACS MD simulation (Lennard-Jones or Coulomb)?
3
How to orient the protein for lipid bilayer simulation in Gromacs