How reactivity of a organic molecule depends upon HOMO and LUMO

Here are my data. 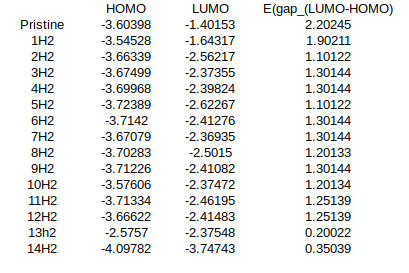 The correlation between the HOMO-LUMO gap and reactivity stems from second-order perturbation theory. A molecule is said to be reactive, if either (1) it reacts exothermically and quickly with many kinds of molecules, or (2) it decomposes exothermically and quickly by itself. These two cases can be unified as: a reactive molecule is one that tends to significantly lower its energy in the presence of a perturbation, where the perturbation can be either external (from other molecules) or internal (from the structural change of the molecule itself).

i.e. the reactivity is inversely proportional to the HOMO-LUMO gap.

The obvious conclusion at this point is that, while the reactivity may have a negative statistical correlation with the HOMO-LUMO gap, the correlation can only be relied upon under heavily controlled conditions. The reactivity must not be too low, nor can it be too high; the matrix element $|\langle \Psi_0 | V | \Psi_1 \rangle|$ must be relatively large, at least it must not be zero; the exciton binding energy of the first excited state is either small or systematic, so that the trend of $\epsilon_{LUMO} - \epsilon_{HOMO}$ reflects the trend of $\omega_1$; and finally $|\langle \Psi_0 | V | \Psi_1 \rangle|$ must be roughly constant among the molecules to be studied. If any of the conditions are violated, then you can never explain your reactivity based on the HOMO-LUMO gap. I said never, because even if the HOMO-LUMO gap does correlate perfectly with the reactivity, you are achieving this correlation largely by luck, i.e. by exploiting an accidental cancellation of the contributions of $\langle \Psi_0 | V | \Psi_0 \rangle$, $|\langle \Psi_0 | V | \Psi_I \rangle|$, the $O(V^3)$ term, and the exciton binding energy.

Thus my suggestion is: observe if your HOMO-LUMO gap data do correlate with your reactivities. If yes, you can comment that the correlation exists, or that the trend of the HOMO-LUMO gaps contributes to the trend of the reactivities, but unless you provide evidence that the aforementioned four approximations hold, you should not say that you "explained" the reactivities by the HOMO-LUMO gaps. If no, then simply move on, and try other descriptors (atomic charges/spin populations/bond orders at transition states, for example) instead - there wasn't a strong reason for you to expect a good correlation in the first place.

12
What are the methods for calculating solvation effects in free energies and how do they compare?
11
How does one compute the boiling point of a liquid made of a particular molecule?
7
Can the dehydrogenation energy be negative?