The format and values provided by Basis Set Exchange

In this question and answers, I found that Basis Set Exchange provides information about the orbitals (e.g., the orbital exponents and contraction coefficients). For example, the following example is orbital data of the oxygen: 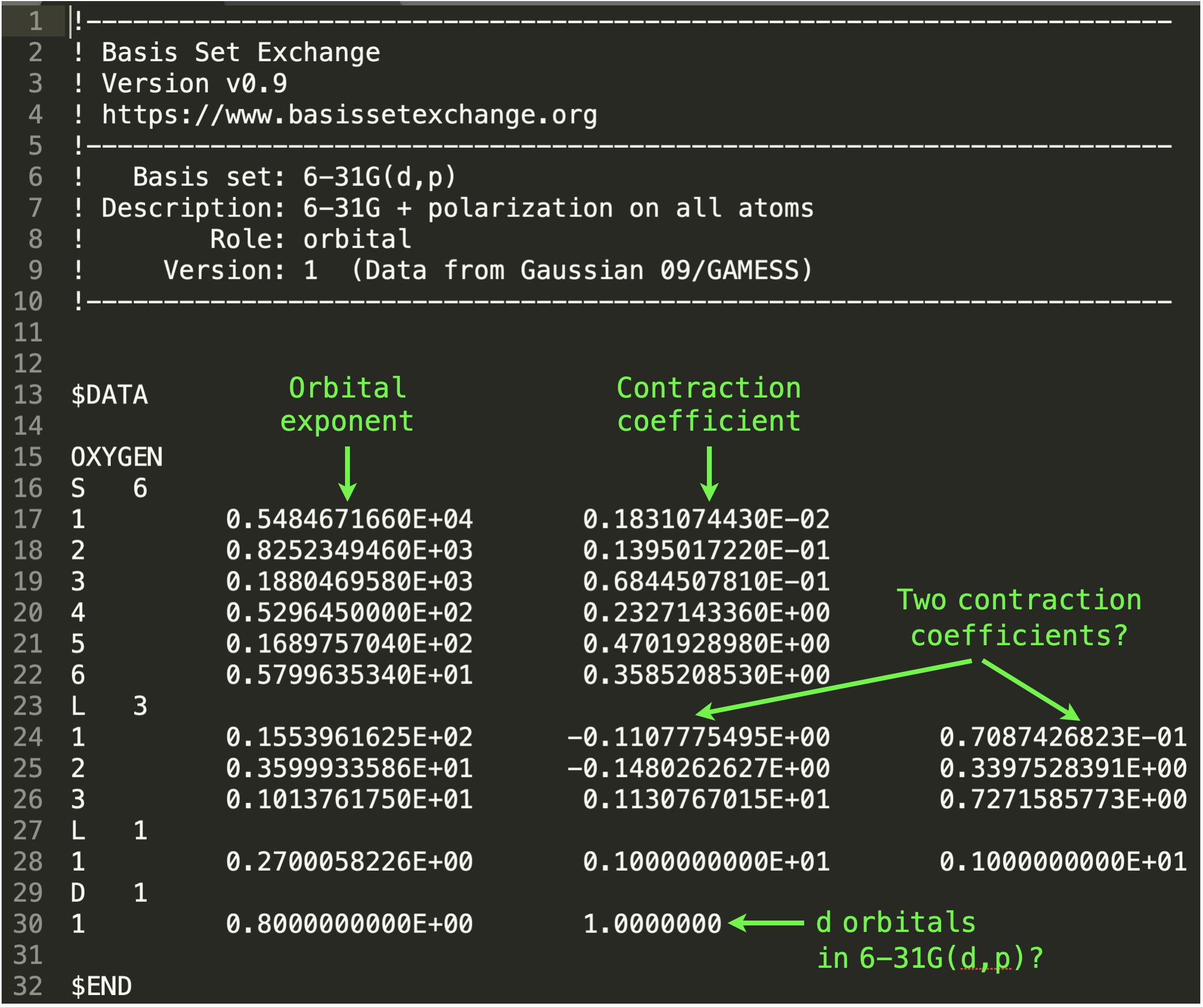 However, I cannot understand the details about these values and meanings; specifically I have three questions as follows.

Thank you for this comment from Lancashire3000. I add the following example for describing my confusing. I believe that "31" of 2px in the 6-31G basis set can be written (but omit the spherical harmonics) as:

When it becomes confusing to figure out what's going on in a basis set, I find it useful to look at the same basis set in other formats.

The CFOUR / ACESII / MRCC format for that same basis set looks like this:

L is the name Pople used for this type of shell, but I like how the Gaussian format labels these functions (SP) as it makes it more explicit what is being described. Your overall description of the (GAMESS?) basis format is correct, but this use of two contraction coefficients is almost exclusively seen in the older Pople (x-yzG) and STO-nG basis sets.

In the original STO-nG paper[1], they decided that rather than using a separate set of exponents for the 2s and 2p orbitals, they would use a single exponent for each of them. Even more so than today, calculation speed was highly valued at the time this basis set was made. By creating this L shell, integral (particularly two-electron integral) evaluations could done more quickly with more reuse of intermediates. As an example that they give in the paper, if you have a two electron integral involving four P functions, you can reuse the same exponential and error function intermediates to compute $3^4=81$ different integrals (same intermediates for $p_x$, $p_y$, $p_z$). If you have integrals involving 4 L functions, these intermediates can be reused for $4^4=256$ different integrals.

Overall they found that the time per integral for small molecules was roughly half when using these L functions compared to having separate S and P exponents. The downside to using the same exponents for S and P functions is that it makes the basis less flexible. Combine this with the relatively minor speedup by today's standards and you can see why this practice fell out of favor.

So this specification for L tells you the exponents used for 2s and 2p (x/y/z) in the first column and then the next two columns give the separate contraction coefficients for the 2s and 2p respectively. You likely won't see this three column format outside of the Pople and STO-nG basis sets because more modern basis sets have found different ways to speed up integral evaluation without combining primitive exponents.

Not the answer you're looking for? Browse other questions tagged quantum-chemistry electronic-structure gaussian basis-sets databases or ask your own question.

10
How can I find the parameters in a basis set?

19
When using the "even tempered method" for augmenting basis sets, what justification is there for the numerical factor which is used?
23
Which basis set families were optimized to give the lowest possible variational energy for a given number of orbitals?
11
Predicting linear dependencies in a basis set in advance of calculating any integrals
7
p-orbitals in STO-3G basis set
14
Is basis set superposition error reduced when using the GAPW method?
9
How are molecular orbitals constructed from the coefficients and basis set?
8
Is the number of basis functions same in the different atoms in the 6-31G basis set?
10
How can I find the parameters in a basis set?
9
Too large value of s-orbital in near nucleus
5
About the order of indices in basis set expansion