Why don't we use the principal quantum number when building the projected density of state?

I am using VASP to calculate the projected DOS, but I am not sure why we aren't using the principal quantum number when doing the projection.

According to the VASP wiki, LORBIT would control VASP to generate PROCAR file, which contains the spd- and site projected wave function character of each orbital. It is called lm-decomposed, where l,m are the angular moment and magnetic quantum numbers.

Since the electronic band structure is composed of atom orbitals, shouldn't we use the principal quantum number for projection as well? Taking Titanium as an example, its electron configuration is 1s² 2s² 2p⁶ 3s² 3p⁶ 4s² 3d². If we only do lm-decomposition, how should we distinguish the contribution from 3s and 4s? 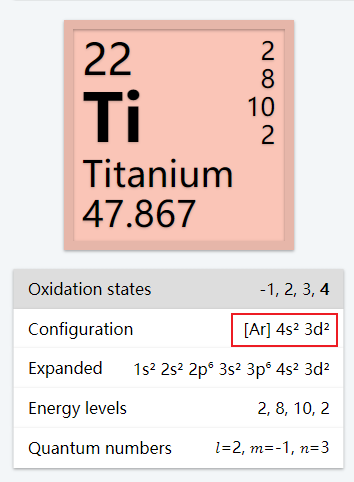 I think the reason is many-fold. In addition to what Tristan mentioned, there are some other possible reasons:

I think this issue is avoided in practical sense. I am not sure any of the psuedopotentials provided with VASP actually include valence electrons of the same angular momentum (so you never have 3s and 4s as valence), since these states are normally part of the core. I don't think there is any reason you cannot do this in theory, but in practice the core is always remaining the same so this doesn't need to be available in VASP.

This is probably not true if you are doing all-electron calculations in a different code.

Not the answer you're looking for? Browse other questions tagged density-functional-theory vasp density-of-states or ask your own question.

11
What is the difference between DOS and PDOS?

30
What are the positives and negatives of periodic DFT codes that don't use plane-wave basis sets?
12
Why is the Nonequilibrium Green’s function (NEGF) method for quantum transport not implemented in plane wave codes like VASP and Quantum Espresso?
27
When and Why does Density Functional Theory (DFT) fail?
16
How the projected density of states is built
14
When do I use the lattice parameters obtained computationally vs experimentally?
8
How to use the ev.x tool in Quantum ESPRESSO?
9
Why do we need to build a supercell to use the DFPT in Phonopy interfaced with VASP?
10
Why does the S squared value have no meaning in Density Functional Theory?
7
Why do we need to use fake k-points when doing HSE band structure in VASP?