Which atoms should be fixed when simulating metal oxides surface relaxation?

I am trying to model the surface relaxation on the TiO2(Anatase-101) surface, but it confuses me that when I try to set some atoms as fixed, unlike the crystal that only contains one element, there is no clear boundary between each layer of atoms.

My question is:
For metal oxide, there is no boundary line between each layer, how should I choose the atoms that I want to fix? 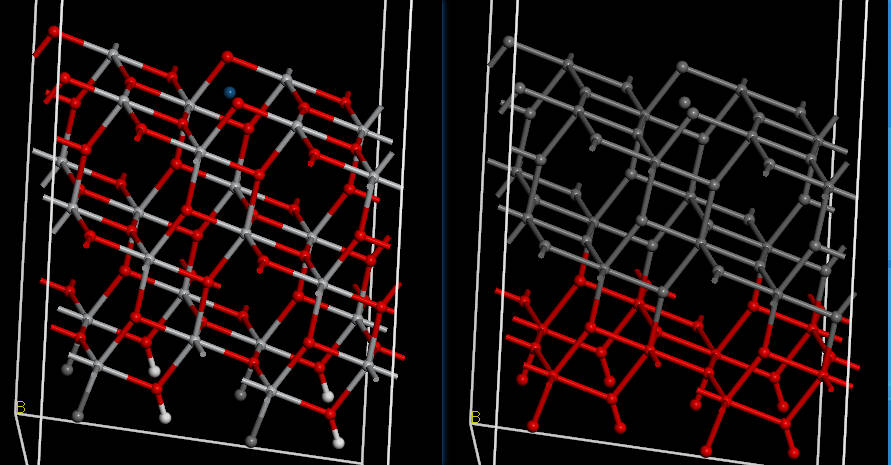 Worst option in terms of precision, but simplest one: make fixed atom every crystall cell. This way you will see familiar crystalline structure, but a lot of forces will remain between these fixed points. You will only see changes in extreme case, like change of a crystal cell. Example: research about high pressure change to a crystal structure, probably superconductors.

Popular method with some precision: make atoms that are closer than a certain distance to a surface fixed. Idea is that in practice oxide is often attached to a substrate, and that substrate doesnt allow the oxide to move. You can study surface effects, catalytic activity for small molecules. Example: surface catalysts used in cars exchausts, hand warmers. Substrate plays an important role if oxide is a few nanometers, as it defines forces that keep the catalyst in a certain extended or contracted state. You can account for this by spacing atoms of the oxide's first layer accordingly. You will likely be able to see only a few layers, and then atoms' positions will become more chaotic, especially if spacing is far from what is found in a bulk crystal.

Emerging field, nanotechnology: make only one or a few far away atoms fixed. This allows to study most complex topics like nucleation, nanoparticle growth and stabilization. You will likely not see any familiar patterns, small nucleation sites are full of defects, and structure looks chaotic. Example: some UV protection for plastics, window films.

As usual, 'it depends'. What effects, what industry, do you want this study to be useful for? Select an appropriate complexity of a model based on that.

Not the answer you're looking for? Browse other questions tagged vasp crystallography surfaces or ask your own question.

12
Overview of how self-consistent dynamical low-energy electron diffraction simulations are performed
10
Get fractional coordinates from special Wyckoff positions
7
Will there be a difference between GGA and GGA+$U$ for material with Sc element involved?
12
How to sort a supercell for a molecular crystal?
11
High throughput tool to quantify the similarity of crystal structures?
8
Quantum mechanical antireflection coating; what quantity would be analogous to index of refraction?
8
When to use pseudohydrogens to passivate a slab?