Stack Overflow for Teams is moving to its own domain! When the migration is complete, you will access your Teams at stackoverflowteams.com, and they will no longer appear in the left sidebar on stackoverflow.com.

Check your email for updates.

I am currently working on a machine learning with spectroscopy. I had learnt about the Franck-Condon principle and the vibronic coupling in photochemistry courses in my undergraduate lectures. However, in computational chemistry when electronic spectra (absorption) are calculated with TD-DFT for example, I find the usage of the terms "vertical excitation" and "0-0 transition". 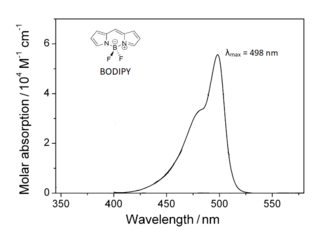 Now I used to think that the absorption peak here (498 nm) corresponds closest to results of the "vertical excitation", since the light absorption in experiment is faster than nuclear movement. But recently I saw a paper where they were using "0-0 transitions" to compare against experiment. I had the impression from the photochemistry lectures that the "0-0 transition" is usually not the peak in experimental spectrum due to Franck-Condon effects: 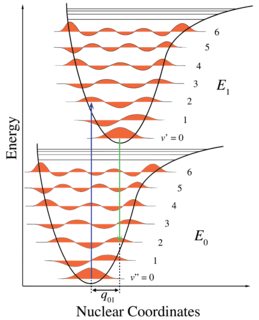 Could someone please help me understand these terms and what their link to the experimental spectrum is?

Yes, the absorption maximum is usually close to (but not necessarily exactly equal to) the vertical excitation from the ground state, due to the Franck-Condon principle. However, this does not mean that the 0-0 excitation energy is not experimentally measurable. The point is that, when one approximates the ground and excited state potential energy surfaces as quadratic surfaces with the same quadrature, one can show that the 0-0 energy is exactly the average of the Franck-Condon absorption energy and the Franck-Condon fluorescence energy. Therefore, one can derive an experimental estimate of the 0-0 energy from an average of the experimental absorption and fluorescence energies. Some similar but slightly different alternatives are (1) averaging the absorption and fluorescence wavelengths instead (which is not equivalent to averaging the excitation energies due to the non-linear relationship between wavelengths and excitation energies), and (2) plotting both the absorption and fluorescence spectra, find the intersection point of the two spectra, and read off the corresponding excitation energy. I'm not sure which of the three strategies is the best, but mathematically they should give quite similar results for systems whose Stokes shift is not too large; when the Stokes shift is very large, all methods should become unreliable since the quadratic approximation of the PESs break down (EDIT: this holds for most, if not all, realistic molecular PESs, but does not necessarily hold for artificial PESs, such as those that are by construction globally quadratic. Thanks Hans Wurst for pointing this out).

Moreover, some experiments may probe the 0-0 energy directly. One obvious example is the high-precision experiments that exhaustively enumerate all low-lying vibronic levels, fit potential energy surfaces based on the data and read off the 0-0 energy from the PESs. Another example is to extract the 0-0 energy from ground state and excited state reactions. Say you have measured the equilibrium constants of the reactions $A + B \to A^+ + B^-$ and $A^* + C \to A^+ + C^-$, where $A^*$ is one of the excited states of $A$, and you know the redox potentials of the $B/B^-$ and $C/C^-$ couples. Then you can calculate the 0-0 Gibbs free energy of $A$; extrapolation to zero temperature yields the 0-0 energy of $A$.

Finally, there is a trivial case for gas phase measurements of very small molecules. In this case the vibronic levels are usually highly resolved, and chances are that the 0-0 excitation appears as an isolated peak that does not overlap excessively with other vibronic peaks. In this case you can directly obtain the 0-0 excitation energy from experiment, provided that you can correctly assign the 0-0 peak.

"I find the usage of the terms "vertical excitation" and "0-0 transition". I am struggling to understand what they mean"

"Now I used to think that the absorption peak here (498 nm) corresponds closest to results of the "vertical excitation", since the light absorption in experiment is faster than nuclear movement. But recently I saw a paper where they were using "0-0 transitions" to compare against experiment."

If the experiment uses a laser to excite the molecule, and the laser's peak wavelength exactly matches the energy gap between $v^{\prime\prime}=0$ and $v^\prime = 0$, it won't be a surprise if the peak in the absorption corresponds to a "0-0 transition". In two-color phooassociation experiments, a molecule is created in an arbitrary $v^\prime$ state, then de-excited to an arbitrary $v^{\prime\prime}$ depending on the two "colors" of the laser.

If you shine light on a molecule with a wide spectrum of equally distribted frequencies, then the peak absorption would likely happen where the Franck-Condon overlap is greatest. This can be calculated by obtaining the wavefunctions of the ground and excited states and doing an integral.

In the case of the BODIPY figure in your question, perhaps you can calculate the $v=0$ energy of the ground state and the excited state, and see if 498nm is much greater than the difference. If it's much greater, then perhaps we're looking at a 0-$n$ transition where $n>0$ (and perhaps it's vertical, but I won't say that it's guaranteed!).