What does it mean by "scale mismatch" and "bridging of scales"?

As far as I understood, molecular simulation works in two types of scales:

The more accurate the model is, the more time and memory it takes. I believe this is called the scale mismatch problem. Connectedly, Bridging of scale would refer to adopting techniques to simulate a more accurate model in less time and use less space in the memory.

At first a lase pulse of few femto-seconds (fs) may excite electrons in a nonequilibrium configuration. There will be a coherent electron dynamics on the time scale of few hundreds of fs. Coherences will eventually de-phase leading to non-coherent and non-thermal electron population dynamics. Electrons will reach a quasi-equilibrium statistical distribution at very high temperature and, on an even longer time-scale cool down. Due to the interaction with the lattice, also the phonons will evolve, in general on a longer time-scale compared to the electrons. There could be coherent phonons at first and later non-termal phonon distributions, phonon heating and cooling. On even longer time scales both electron diffusion may take place, as well as structural distortion of the material. See here for more info: Nature Materials

While a fully quantum mechanical approach could describe all these phenomena, the approach would be non feasible for all the phenomena (and also not needed). The fully quantum description would be useful to capture the initial coherent dynamics, Boltzmann rate equations to capture the non thermal occupations, effective temperature models to describe the cooling processes, etc ...

However each of the above mentioned approaches works on a specific aspect and on a different time scale. This means that there is a time (and space) scale mismatch. Putting together different kind of simulations is what I would call a "many scales" approach, i.e. you kind of partition the physical process in sub-problems. What a real "multi scales" approach would do instead, is to somehow interface the different approaches and enable one method to continue from the output of the previous. A "multi scales" approach would enable "scale bridging" physical problems with a "scale mismatch".

Scale-mismatch, more appropriately, Scale-gap, is the difference between the scale at which chemical or physical laws are available and the scales at which we want to study a phenomenon.

This gap can be present either on the temporal scale or spatial scale. 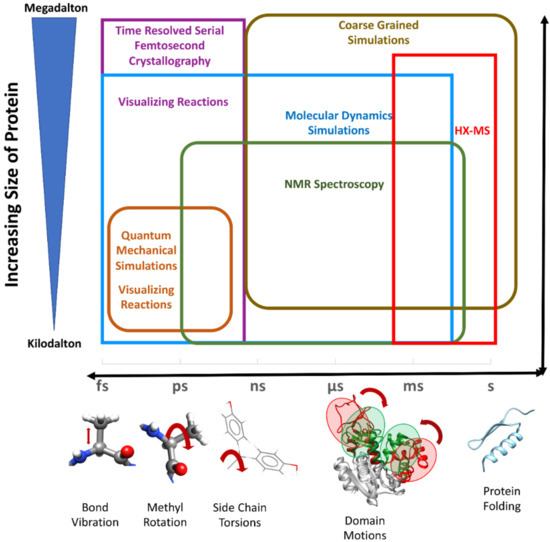 For instance, in the above image, protein-folding takes place at the "seconds" time scale. However, the chemical or physical laws governing protein-folding occur at the femtosecond or picoseconds scale.

Therefore, this is an example of a temporal scale gap.

11
What does capital sigma followed by an integer (Σn) mean in the context of grain boundaries?
12
What does it mean to assign group operations to distinct sets for space groups?
14
High-Performance Computing: What does "Mio CPUh" mean?
12
What does a density of states (DOS) plot show?
5
What does the "pn" column mean in this pseudopotential file?
11
What does "force field" mean?
1
What does "dynamics" mean in matter modeling?
4
Scales for simulation