Combustion models. How does one determine the most relevant reactions?

I am not entirely sure if this is better suited to Chemistry.SE or Matter modelling, but hey, you guys are nicer.

I am fascinated by just how complicated combustion processes are.

I was watching an old SpaceX video on how they model the combustion processes in their Raptor engines. (Here is a really relevant video with timestamp, which I recommend people watch in full.)

They give the example of hydrogen burning with oxygen, which requires 23 separate chemical equations to model, and that is with the reduced mechanism. 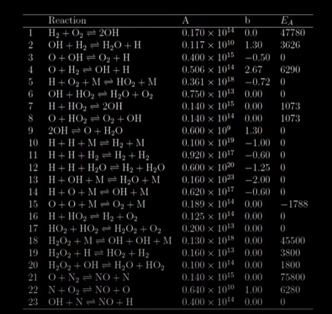 (Incidentally, I would like to know what column 'b' refers to in the table above.)

The situation with methane combustion is even worse. 53 species and 325 reactions are involved.

If one were to attempt to model simplified versions of these processes, how would they go about it?

Is there an a-priori way of telling which individual reactions contribute little to the overall combustion, just by the identity of the species involved and the other entries in the table? Intuitively, one expects the interactions of two different rare high-energy intermediates to not contribute greatly to the overall combustion, but what if it does?

While highly nonlinear, I don't believe these equations are chaotic, at least in a situation with perfect mixing. Even so, I suspect changes in the proportion of trace intermediates could very easily have large effects on subsequent reactions.

Does it come down to running the full simulation, then successively removing reactions until the accuracy drops below an acceptable threshold? Or are there tricks one can use to simplify these equations?

One way to model a multistep complex mechanism is to built a microkinetic model from the rate constants for of all relevant elementary reactions (forward and reverse).

For example, for reaction 1 you have

And the concentration of $\ce{H2}$ is affected by every elementary reaction that produces or consumes it.

One can integrate the concentrations of all species involved for a given set of initial conditions.

To identify which elementary steps in the complex mechanisms are most important to the overall reaction rate one can use the degree of rate control $X_{\mathrm{RC} i}$ for elementary step $i$:

The larger the numeric value of $X_{\mathrm{RC}, i}$ is for a given step, the bigger is the influence of its rate constant on the overall reaction rate $r$.

Of course that one can do more complicated things such as including the heat and mass transfer across the system.

Not the answer you're looking for? Browse other questions tagged reaction-mechanism or ask your own question.

12
How can one computationally determine the flammability of a molecular system?

6
Is It possible to do microkinetic modelling for liquid phase reactions, in the presence of a catalyst?