Why is the planewave codes ecosystem healthier on free/opensource software adoption, when compared to codes supporting atom-centered orbitals?

Regarding the branch of matter modeling that deals with electronic structure methods, I think we can divide it in two camps: Those who work mostly with planewave-based software, geared towards periodic systems, typical of solid-state physics research; and those working mostly with software based on atom-centered Gaussian type orbitals, geared toward molecular systems, typical of quantum chemistry research. There's a lot of overlap between both camps, but I think people tend to stick mostly with one kind of system, in their research.

Said that, as someone more familiar with systems typical of quantum chemistry, even before having the hard numbers to back it up, I always had the impression my peers at the solid-state physics community were better served in terms of free software / open source tools (and even just "free as in beer" tools), while we were mostly stuck to expensive proprietary tools, the alternatives being much less well known and used. I even felt a bit envious because of this.

Now I noticed this answer to one previous question here: "More matter modeling codes or better codes?", where user @leopold.talirz pointed to a study preprint(1) where they systematically reviewed available matter modeling packages, their citation counts, source availability (either closed, available, copyleft or permissive) and cost (either commercial, free, or free only for academics). Then I actually downloaded the data in their site, to check if my impression about this was right or not. I think it is mostly correct. If we filter by the "PW" tag, for planewave, we get this: 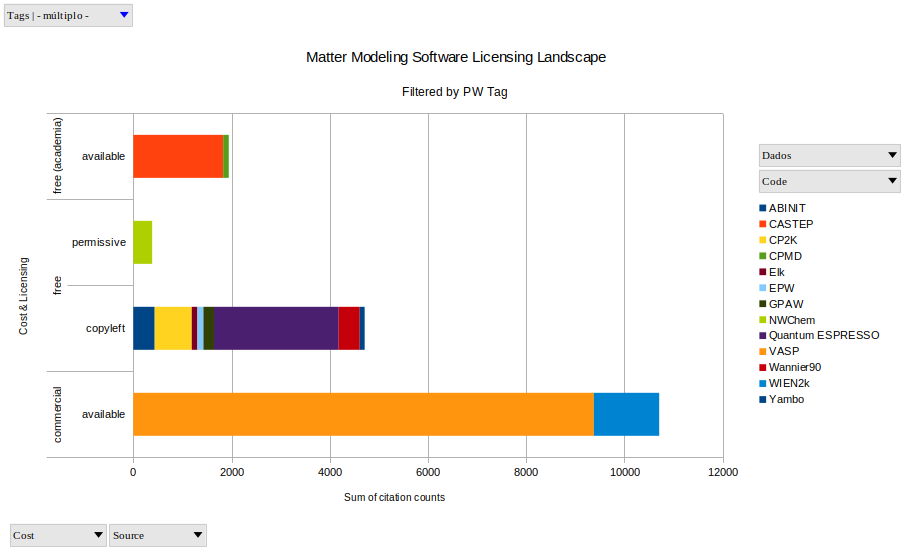 While filtering by "GTO" tag, we get this scenario: 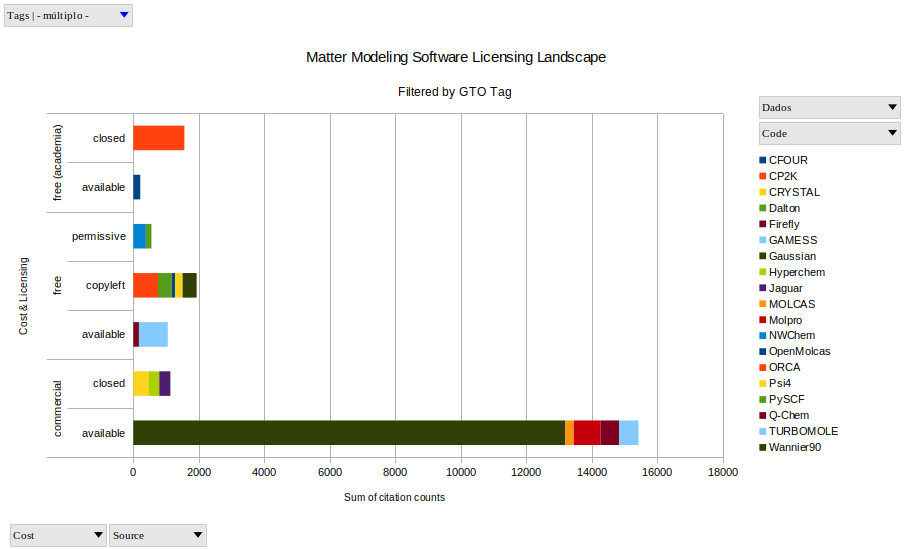 So I ask, what are the causes for this matter modeling software freedom gap between PW-based codes and GTO-based codes?

Disclaimer: These are just some observations; I don't claim to know the answer to this question.

There's a lot of overlap between both camps, but I think people tend to stick mostly with one kind of system, in their research.

You may be largely correct - I'd just like to point out that if we are looking at the simulation engines (rather than what people do) there now are some that marry both worlds, such as CP2K or NWChem.

what are the causes for this matter modeling software freedom gap between PW-based codes and GTO-based codes?

Some possible factors to consider:

[1] While the MIT license was created earlier (in the 1980s), the popularity of permissive licenses like MIT has only very recently (late 2000s) gained more prominence, at least as far as the codes in this dataset are concerned.

Not the answer you're looking for? Browse other questions tagged quantum-chemistry solid-state-physics open-source history free-software or ask your own question.

20
Is there any complete list of open source hubs specifically designed for materials modeling and computational materials science?
19
What significant matter modelling methods are implemented in commercial software, for which there is no freeware alternative?
21
Since MKL is not optimized for AMD hardware, should I use a math library specific to AMD, or would an open-source one be just as good?
15
What are some open-source all-electron DFT alternatives to Wien2K?
12
What are some of the advantages and disadvantages when using shape consistent pseudopotentials as compared to energy consistent pseduopotentials